I have a lot of friends who are quite into canning. In fact, a couple of them make their living preserving and canning food, of which I am deeply in awe. I have had good intentions of putting up seasonal fruit in the past — several pounds of blackberries I picked last spring are still in my freezer, waiting their turn to be transformed into something delicious, while the unsatisfactory results of my attempt to recreate the figs in syrup of my East Texas youth malinger in the back of my pantry.

In fact, that disastrous attempt at preserving figs took place nearly two years ago. I was so burned by my failure that I just packed away all those good intentions of being a good steward of food and expanding my culinary skill set. But then, my husband came across Canning for a New Generation, which I’d added to my Amazon wishlist in a fit of inspiration (and possibly hubris) and bought it for me for Christmas. I have a thing about not using gifts that people give me, so I dutifully went through it and marked all the interesting-looking recipes with a sticky note. The number of blue sticky notes sticking out of the top of the book is kind of surprising — there are a lot of yummy-looking recipes in there, and not just for things to put in jars. For example, you might not know what to do with that rhubarb and strawberry jam you just made; lucky for you, there’s a recipe for cardamom pinwheel danishes just a few pages away that calls for that very jam. Servicey!

Because the cookbook is arranged by seasons and we’re still technically in winter, I started with an accessible-looking winter-fruit recipe (I really wanted to start with sauerkraut, but balked at having to babysit a jug of fermenting cabbage for three weeks. So, I opted for the grapefruit segments in mint syrup. Except I ignored the mint that I bought for so long that it froze in the back of my fridge. So, I decided to adapt the recipe to what I had on hand and used a vanilla bean instead. (I still have a good six pounds of grapefruit in my fridge, though, so I might pick up some mint on my next trip to the grocery and attempt the mint version in a few days.) 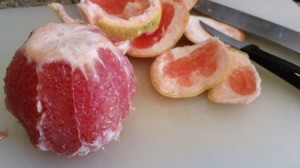 Quite frankly, the most complicated part of this recipe is breaking down five pounds (about 7 small) of grapefruit. I did not go to culinary school, so my knife skills when it comes to making supremes leave something to be desired — and a lot of fruit waste. It probably took me a good hour to section the fruits. If I had planned more wisely, I would have put the water in the canning pot (borrowed from my friend Sally) to boil much sooner than I did because that also took forever.

The rest of the recipe was pretty easy peasy; in fact, it was much less complicated than I was expecting. I was a little concerned that I didn’t use up all my syrup, and I also worry that maybe I should have used two vanilla beans instead of just one, because I did not get much vanilla when I tasted a small amount of the syrup. You only process this recipe for five minutes, so, really, all of the work is up front. While the jars were processing in the water bath, I was a little concerned about the seal on the jars because I saw some bits of grapefruit pulp floating in the water, but I think those had been stuck to the outside of the jars and I just hadn’t noticed it when wiping them down pre-bath. But all the lids made their delicious POP! after I transferred them from the water, so crisis averted. 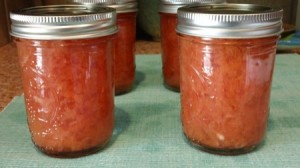 My biggest complaint about this recipe is that it only yielded four half-pint jars. It seems like all that work breaking down fruit would result in a wealth of jarred pink deliciousness perfect for handing out as gifts to coworkers or loved ones. Alas, largesse in this regard calls for the sacrifice of much time (and an incredibly sticky counter).

The cookbook says that this preserve would go well with gingerbread, panna cotta, or vanilla ice cream; I can also imagine using it as a topping for Greek yogurt or as a sweet-tart spread on a fluffy scone.

Now that I’ve broken the seal, so to speak, with (what I assume has been) a successful foray into canning, I’m looking forward to trying new recipes. I can definitely see myself branching out into cardamom plum jam, pickled beets and jalapenos, and tomato sauce. What are some of your favorite things to can?

Break down your fruit into supremes and place the segments in a medium bowl as you work.

Into a two-cup measure (I used a Pyrex measuring cup), pour the juice collected in the bowl holding the supremes; add enough water to make 2 full cups liquid.

Place the liquid into a medium pot with the sugar and the vanilla bean(s), making sure to scrape the innards of the beans into the pot.

Bring to a boil over medium heat, making sure all the sugar is dissolved. Discard the vanilla bean(s).

Fill the sterilized jars with the grapefruit segments. Ladle in the syrup and leave 1/4 inch headspace at the top of the jar. Use a chopstick (don’t use a metal utensil) to remove any air bubbles inside the jar. Wipe the rims of the jars with a damp paper towel, then place a flat lid and ring on each jar.

Place the jars into the boiling water of the canning pot and process for five minutes. Make sure the water covers the jars by at least an inch.

Remove the jars and place them on a towel or cloth placemat and leave them be for 12 hours. If you don’t hear the lids popping, press the center of each lid after an hour; if you can push it down, it has not sealed and is not shelf stable (in this case, refrigerate the jar immediately). Label and store or give as gifts.