By about an hour and a half into our family’s tax preparation Saturday, my fidgety preschooler, her stressed-out dad, and I were all going a little bonkers. This is no one’s favorite annual ritual, is it? Filing tax returns takes time, focus, and money. . .commodities this mom, anyway, considers pretty precious.  Although we know we need to do it, paying your taxes can feel pretty thankless. Really what’s it all for, anyway?

According to research, most of us don’t know. In polls, taxpayers guess wildly off the mark about how their tax dollars are spent. Uncle Sam has yet to offer an itemized receipt for each household’s ante. And there isn’t one big agency to explain all your taxes—federal, state, and local.

In other words, the core financing for whatever we consider common good is simultaneously paid by everyone and understood by almost no one. This is a big civic problem. How can we improve our common good with a gap like that?

I say, if Presidents’ Day is a time to talk about the achievements of presidents and Mother’s Day is for acknowledging moms’ contributions, Tax Day should celebrate taxpayers. After all, you, the taxpayer, did something important over the last year. I’m no budget expert, but from what I’ve read you helped some 110 million seniors, poor children, and people with disabilities cover the basics and get the health care they need. You helped defend your country and community against terror and crime, epidemics and accidents, blight and ignorance. You reduced poverty’s sting for 29 million kids and vulnerable adults and kept 15 million more from becoming poor. You helped educate a generation. Thank you for that.

Want more detail? If you were about in the middle income in Texas in 2009*, your effective tax rate—state, local, and federal combined—was between 27 and 28 percent (according to data from Citizens for Tax Justice, the Tax Policy Center, the Tax Foundation, and the Institute on Taxation and Economic Policy). So, for each dollar you earned, at least 72 cents got decided by your household’s budget, and roughly 28 cents went into the big pot called taxes. To find out how your 28 cents got divvied up, I mined data from the Center on Budget and Policy Priorities, the Center for Public Policy Priorities, the Texas Legislative Council, local sources, and First Focus. Here’s how the spending breaks down: 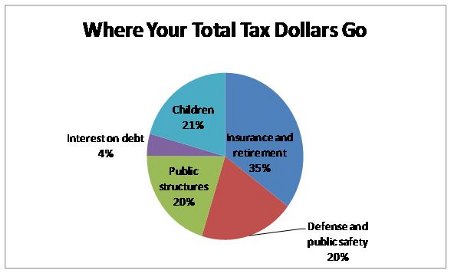 9.9 cents for Insurance and Retirement (Social Security, Medicare, Medicaid for seniors, etc.)
During our working years, the largest portion of our tax dollars act as security for other stages of life. They’re for the circumstances when, the odds say, we will have less than we do now: when we retire, get laid off, or age out of the desirable phase for private health coverage. Economists classify some of this as common good, too (too much uncertainty about health care and the like can act as a drag on the economy).

Social insurance programs, like Social Security, Medicare, and unemployment insurance, account for more than 6 cents of your dime in this category. About 2 cents goes for the analogous Medicaid programs for the elderly or disabled, which picks up the tab when things get really rough (e.g., you need full-time nursing home care or have a relative with a serious disability in need of care like that). Roughly 2 more cents goes toward adult “safety net” programs—assurance that, no matter how bad your luck, you shouldn’t lack basics like food and shelter.

5.5 cents for Defense and Public Safety (Military expenses, police, etc.)
Protecting the country costs about 4 cents out of your dollar. Only about 1 cent of that goes toward actual combat operations, while the rest pays for military personnel and installations, veterans’ benefits, and other defense programs. In addition, about 1.5 cents of city, county, and state taxes protect you closer to home, supporting police, prisons, criminal courts, fire departments, and emergency management systems.

5.6 cents for Public Structures (Transportation, parks, research, etc.)
Government does more, though, than cover public safety and “private safety” (the social insurance and safety net programs). It exists to accomplish the things individuals and private companies need done but often won’t do alone. So, you spend 1½ cents of your dollar on highways, roads, bridges, and transit systems. You spend less than that on parks, libraries, food inspections, environmental protections, and historical preservation combined. About 1 cent goes toward higher education and medical and scientific research of the sort that finds cures to diseases or develops new technologies (examples include those behind the space program and the project that evolved into the Internet). The remainder gets directed toward everything else government does in this category: from creating waterways to running hospitals to city economic development projects to international diplomacy. Only a tiny fraction of one penny, by the way, gets spent on foreign aid.

1.2 cents for Interest on the National Debt

For now. That slice is expected to grow.

At the intersection of all the good things government does is this population that decides our shared legacy. This nickel-plus ensures tomorrow’s taxpayers can pay into the “insurance and retirement” bucket (i.e., when you need it most!), that we can continue to protect our shores and communities, that we can maintain and advance our public structures, research, the arts—not to mention our businesses and economy, as a whole.

So, about 3.5 cents of your dollar goes directly to educating the future workforce. And because that education won’t do much good if the children in question are missing basic needs, a little more than 2 pennies out of your dollar goes to other services for youth. In other words, kids who need to can see a doctor, have a safe place to go after school, get therapy or vaccines or meals, or escape an abusive home. It’s not a lot of your 28 cents, and it is a place where nearly all other states spend more. Still, this may be your tax money that goes furthest.  Once again, thank you.

* I used mostly 2009 data, because last year was unusual with the federal stimulus offering many one-time tax cuts.

5 Comments on As Tax Day Approaches, a Thank You