Scooby-Doo Live!
The Long Center
Jeepers! SCOOBY-DOO and the MYSTERY, INC. gang have been called in to solve an epic mystery! A trouble-making ghost is haunting a local theater and Shaggy, Fred, Daphne, Velma and Scooby-Doo are on their way in the Mystery Machine to help solve the case. This hilarious live musical theatre show brings everyone’s favorite cartoon series to life.
June 8
3pm, $19 and up

Erth’s Dinosaur Zoo Live
The Long Center
Get ready for the ultimate playdate – 65 million years in the making – as Erth’s DINOSAUR ZOO LIVE guides your family on a breathtaking tour beginning in pre-historic Australia.  You’ll observe, meet and interact with an eye-popping collection of amazingly life-like dinosaurs and other creatures presented in a theatrical performance that will thrill and entertain kids while stimulating their imaginations in ways that will forever connect them to their world.
June 17-23
Times vary by day – check website for schedule, $18 and up

Alice In Wonderland
One World Theatre
One World Theatre in conjunction with The Missoula Children’s Theatre present ALICE IN WONDERLAND, an original adaptation based on Lewis Carroll’s Alice’s Adventures in Wonderland and Through the Looking Glass.
June 21, 2014
12pm, $12-15

50 Shades! The Musical
The Long Center
A resounding hit in Chicago and New York, and at the Edinburgh Fringe Festival, 50 SHADES! THE MUSICAL opens with a ladies book club deciding to read the Fifty Shades trilogy. Through their interpretation of the novel, the audience is led on an uproarious roller coaster ride of this unlikely bestseller. The show is full of dance numbers and original songs delivered by an outrageous cast with a live, on-stage band.
June 4 and 5
7:30pm, $39

Romeo and Juliet
Penfold Theatre Company at Round Rock Ampitheatre
Shakespeare’s tale of young lovers swept into a catastrophic vortex of misunderstandings, secrets and fate is one of the most beloved stories of all time. Romeo and Juliet, the son and daughter of two noble families locked in an old feud, are irresistibly drawn to each other. Defying the hatred and distrust surrounding them, they dare to believe they can, and must, be together. Romeo & Juliet is the fourth production in the “Penfold in the Park” series, an annual offering of free, outdoor summer theatre, made possible by a partnership with the Round Rock Parks & Recreation Dept.
June 5-28
8pm, FREE

Hamlet
Something for Nothing Theatre at Ramsey Park
Shake out your picnic blankets for a night of Shakespeare under the stars! Something for Nothing Theater returns to Ramsey Park (4301 Rosedale Ave, Austin, TX 78756) with William Shakespeare’s Hamlet. Marking the company’s third annual production of a community-friendly Shakespearean play at Ramsey Park, Hamlet will be performed with minimal props, costumes, and lighting, focusing on storytelling and the rich language of Shakespeare. Performed by a cast of 9 actors, featuring Jon Cook as Hamlet, Hamlet concludes at a brisk two hours.
Through June 7
8pm, FREE, donations accepted 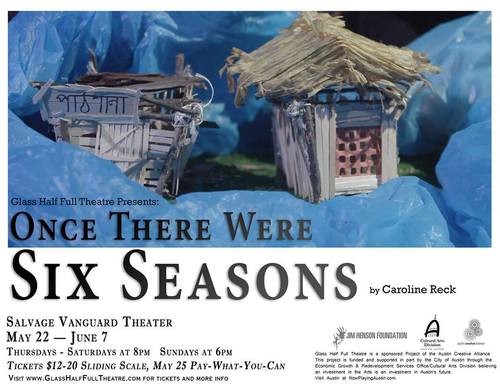 Once Were Six Seasons
Glass Half Full Theater at Salvage Vanguard Theater
Once Were Six Seasons is an interaction of human performers with manipulated landscapes, miniature puppets, and environmental forces. The show re-imagines objects and textiles, from string and paper to recycled Styrofoam packing shapes, as rainclouds and river valleys, mine workers, polar bears, and islands sinking into the sea. It observes the ripple effects of changes in migratory patterns, population surges and decreases, and other natural phenomena; it follows those ripple effects into a near, and a far future, one that includes rebirths, dead ends, and adaptations throughout the natural world.
Through June 7
Thurs. – Sat. at 9:15, Sun. at 7:15, $12-20

Bethany
Theatre en Bloc at the Long Center
In BETHANY, Crystal and Gary live in a nice home in the suburbs. Only it’s not theirs. In fact, they didn’t know each other before they moved in, and the story of how they got there is the beginning of Crystal’s plan to get her life back on track. Between her job at the Saturn dealership, her new housemate’s conspiracy theories, and the motivational speaker who just might buy that sports car, this new dark comedy will take you on the ride of your life, with a woman willing to take on anything and everything… all for someone named Bethany.
Through June 7
8pm, $15 and up 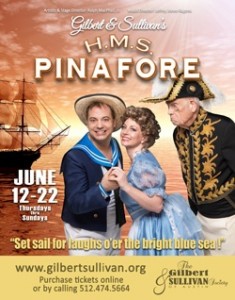 The Gilbert & Sullivan Society of Austin at Brentwood Christian School

The Gilbert & Sullivan Society of Austin presents its summer 2014 grand production of H.M.S. Pinafore; or, The Lass That Loved a Sailor. Nine performances will be presented at the Worley Barton Theater at Brentwood Christian School, June 12-22, 2014. This immensely popular classic was W. S. Gilbert and Arthur Sullivan’s fourth comic opera of their fourteen, and was their first international sensation. Gilbert’s plot is full of his hallmark topsy-turvy humor and memorable lyrics and Sullivan’s music displays his inexhaustible gift of melody, with bright and cheerful tunes that leave audiences humming.
June 12-June 22
Thursdays – Saturdays at 7:30pm, Sundays at 2pm, $7-$30

punkplay
Capital T Theatre Company at Hyde Park Theatre
Mickey, a disaffected high schooler, is befriended by a confused and angry runaway named Duck. Trapped in a suburban wasteland, the two boys come across a vinyl record that upends their adolescent existence. When Duck and Mickey discover “punk” it’s like nothing they have ever heard. It’s fast – it’s alive – it’s the end of music.
Through June 21
8pm Thursdays – Saturdays, $15-$30 Sliding Scale

Sky Candy Presents Cosmicomics
The Long Center
Sky Candy, east Austin’s aerial and circus arts company, is collaborating with acclaimed Austin theatre director, Rudy Ramirez on an aerial theatre production of COSMICOMICS, Italo Calvino’s beloved collection of short stories of the same name. Italo Calvino’s Cosmicomics, a beautiful and unique achievement in storytelling, tells tall tales about creation–magical, fantastical, adventurous stories–but it bases those stories on the findings of science and does not ask that we give these stories our belief, the way that countless creation myths have done over the centuries.
June 21-29
Times vary by day – check website for schedule, $22 and up

Vania & Sonia & Masha & Spike
ZACH Theatre: Topfer Theatre
Vanya and his sister Sonia live a quiet, country life in their childhood home with plenty of time for self-reflection, and humorous counsel from their housekeeper Cassandra, who believes she has the gift of prophecy. Their pastoral world is upended by the return of their dazzling sister Masha (Beth Broderick), a high-maintenance Hollywood movie star, and Spike, her young über-hot boy-toy. Together this unlikely foursome is plunged into an absurd weekend of sibling rivalry and regrets that are triggered by a wacky costume party. This hilarious mashup of Anton Chekhov’s plays, like The Three Sisters and Uncle Vanya, finds Chekov’s classic themes of existential loss and longing giving way to hilarity in Christopher Durang’s surprising, tender and uproarious family reunion.
Through June 22
Wed. – Sat. at 7:30pm, Sun. at 2:30p, $25 and up

The Foreigner
Austin Playhouse
Shy Englishman, Charlie Baker has a hard time speaking to strangers. To help him out, his gregarious friend “Froggy” LeSueur tells the residents of a rural fishing lodge that Charlie is a foreigner who doesn’t understand English. Assuming their secrets are safe, chaos ensues when Charlie overhears dastardly plots involving the residents of Betty Meek’s lodge! Hailed as “a charming comedy about the magic of kindness” by Chicago Theater Beat, The Foreigner is chock full of hilarious slapstick and witty wordplay.
Through June 22
Thursdays – Saturdays, 8pm, Sundays 5pm
$28 Thursday/Friday, $30 Saturday/Sunday, All student tickets are half-price. $3 discount for Seniors 65 and up.

Motherhood Out Loud
The City Theatre
When entrusting the subject of motherhood to such a dazzling collection of celebrated American writers, what results is a joyous, moving collection of stories that is hilarious, and an altogether thrilling theatrical event. Utterly unpredictable, Motherhood Out Loud shatters traditional notions about parenthood, unveils its inherent comedy and celebrates the deeply personal truths that span and unite generations. Written by Lisa Loomer, Theresa Rebeck, Beth Henley and many more well-known playwrights.
Now through June 22
2pm, Sat. and Sun. performances, $10-20

Twelfth Night
The City Theatre
Worlds collide in William Shakespeare’s enchanting and much-loved comedy. In the household of Olivia, two campaigns are being quietly waged – one by the lovesick lord Orsino against the heart of the indifferent Olivia; the other by an alliance of servants and hangers-on against the high-handedness of her steward, the pompous Malvolio. Filled with a cast of unforgettable characters, Twelfth Night combines mistaken identity, high comedy, dynamic narrative, witty invention and the pangs of unrequited love with some of the most exquisite language Shakespeare ever wrote.
Through June 22
8pm Thurs. – Sat., 5:30pm Sundays, General seating $15. Thursday all seats $10. 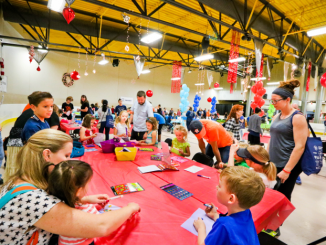 Austin Families Give Back