“Why didn’t anyone tell me that there was a movie out that was made JUST FOR ME?” crowed my friend Erin as we departed the movie theatre on Friday night. “I feel so special!”

The movie in question is Beautiful Creatures, the movie based on the YA thriller that weds supernatural romance with Southern gothic, cowritten by two mothers who tailored a novel specifically for their children.

In a recent interview, Margaret Stohl explained the origins and processes between the inaugural book in their Caster Chronicles series: “I have two teenage daughters who were [coauthor] Kami [Garcia’s] students, she was their teacher when we met. After Twilight, they started telling things to us about what they wanted from a book. They were looking for someone who wasn’t a vampire, they wanted a narrator who was a boy, they were looking for a girl to have powers herself and not just be in love with someone who had powers, and they were looking for the least generic story possible, something really specific that didn’t look like anything else. I told my oldest teenager that we were writing a book and she laughed in our faces and said we would never do it. So it became a dare and we kept at it, and 12 weeks later, we had written a 600-page book.”

Says Garcia, “We would talk a lot first about what we were writing, then we’d map it out super loosely on a big whiteboard with colored pens, and then we would trade. Basically, we were each other’s editor. She would send me her chapter and I would read and I would delete whatever I didn’t like and add stuff, hack and slash, and she’s doing the same thing to mine. And then we would pass the same chapters back and forth multiple times until literally the only thing left standing were the strongest sentences. And then we just kept going forward until we got to the end of the draft. Then we would look at it more analytically and more and more discussion between us. While we were writing, we were just powering forward, even though that process could be horrifying for some writers, having someone else delete what you wrote.”

I love the idea of writing a (600-page!!!) book specifically suited to the tastes of the kids in your house, especially one that subverts the common tropes of YA fiction, which so often finds female narrators swooning over some impossibly wonderful otherworldly boy. What better gift to give your children than a narrative shaped according to their tastes and desires?

“One of the things that [the girls] said was that they were tired of stories that were written from the girl’s point of view, where the guy is the cool, powerful, magical one,” says Garcia. “They wanted the boy’s perspective and the girl to be the magical and powerful one. We automatically knew we were going to write from a boy’s perspective, that was the first decision. And that was actually very easy because we have six brothers between us, so we know a lot about boys. It was fun to show the fact that boys have insecurities and worries just like girls do.” 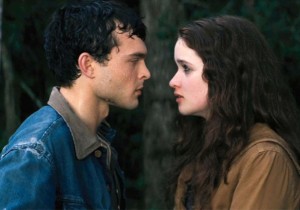 What better way to spend a moms’ night out than seeing a movie based on a book written by moms for their kids? I dragged some willing, stir-crazy moms ready for a night to themselves out to see Beautiful Creatures on Friday night and found it quite entertaining indeed. Alden Ehrenreich, who plays the narrator Ethan Wate, while far too old to pass as a junior in high school, is charming and soulful, his wry and cutting commentary masking a longing and loneliness that only Lena (Alice Engler) can unlock. The supporting cast is impressive indeed, from the scenery-chewing Jeremy Irons as Lena’s Uncle Macon and Emma Thompson as the darkly evangelical Mrs. Lincoln, to the tragically underused Viola Davis as Amma (who in the film is an amalgam of two characters from the book: Amma, Ethan’s housekeeper ,and Marian, the town librarian and longtime friend of Ethan’s deceased mother). The divine Margo Martindale appears as Lena’s Aunt Del; I could have watched an entire film of her exploits and creative wigs. Ehrenreich and Engler have some chemistry, although Ehrenreich far outpaces his on-screen paramour in the acting department.

Beautiful Creatures — in both its textual and cinematic iterations — is not great art, but it is enjoyable entertainment, especially if you’re a fan of YA fiction and escapist films. The fact that a couple of busy moms with day jobs and a collective pack of kids were able to pull off the feat of writing a YA series that has gained international audiences is deeply inspiring and makes me feel guilty for all my wasted hours of playing Words With Friends on the iPad after my kids go to bed.

Kid-Friendly Places to Have a Margarita in Austin

2 Comments on Beautiful Creatures: Moms’ Night Out for YA Fans