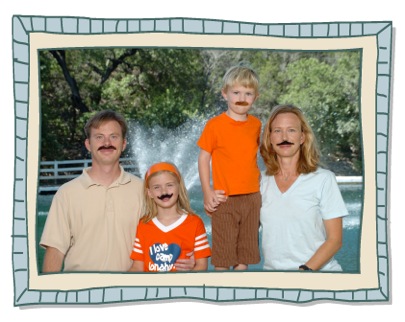 Admittedly, we are biased, but one of the great things about Austin is its people. Friendly, fun to be around and just plain interesting, Austinites make this business of raising a family that much easier. I remember living in the DC area and the first question asked at parties was “So, what do you do?”, meaning, what kind of job do you have? (bonus points if your response included “UN”, “World Bank” or “world peace”). Here, “what you do” might be running a small non-profit on the side, roller derby, storytelling, playing the ukelele or…writing a guidebook about family-friendly adventures.

Since I’ve been posting about things to do in Austin with kids for several years now, I was excited to hear about Annette Lucksinger’s book, Exploring Austin with Kids, which is available for pre-order and will ship on March 1st. Annette gave us a sneak peek of the book, and we can attest that lots of great tips are packed into this one handy book. It’s definitely nice to have over 100 family-friendly outings laid out in one place, not to mention the fact that the entries are also cross-referenced by interest (think airplanes, sand play and stargazing, for example), optimal age range and location. I immediately found myself thinking about whether I have a pregnant friend I could buy a copy for, since it would be a great baby shower gift. 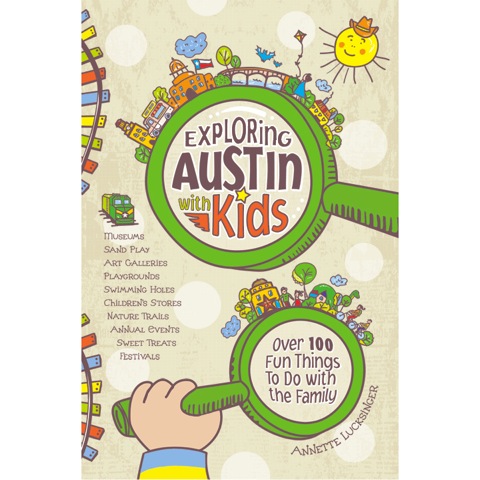 Once I had taken a look at the book, I had a lot of questions for Annette, who was thankfully up for answering them. Here’s what we learned about her and the book.

LiveMom: Tell us a little bit about your new book, Exploring Austin with Kids.

Annette:  Exploring Austin with Kids is a guidebook that describes over 100 family-friendly places in Austin and 25 annual festivals and events. I wrote it to help new parents find their way into the “kid culture” as they transition into becoming parents, for experienced locals to find new places to explore, and for visitors looking for the best of Austin. I think probably one of the most useful parts of the guide is the Table of Contents that arranges all of the entries by kid’s ages, interests, and locations in town. There’s also a listing of free activities. I created the guide to be something I would find value in as a parent.

LiveMom: What made you decide to write the book?

Annette: The year before my youngest went to kindergarten, he decided his life would be much improved if he cut back on preschool to stay at home with Mom (who really didn’t sit at home playing trains, as he thought, but was planning classes and grading college English papers). We decided to hang out more together that year, and I went to the bookstore to find a guidebook that would consolidate the many kid-friendly things to do in Austin and lead us to places beyond our regular haunts. But I couldn’t find one. Maybe I’m the only nut who would want a guidebook to the town she lives in, I thought, but surely there are others who would benefit as well. Hmmm…. and that’s how my trip to the bookstore turned into a project. Honestly, I couldn’t imagine a more fun book to write.

LiveMom: How long have you lived in Austin?

Annette: I grew up in Burnet, a town a little over an hour’s drive away, northwest of Austin. My summer job during college was at Inks Lake State Park. In 1999, I moved to Austin (for the third time) after finishing graduate school at Colorado State University. I started teaching writing and literature courses at St. Edward’s and have been setting down roots here ever since.

LiveMom: How long did it take you to write the book? How much did Austin change as you were writing?

Annette: My ten-year old daughter was helping me with the website content, and to steal her words: “After four years of hard work and taking her kids on crazy adventures, the book is finally finished!”

In that time, I have been amazed how much Austin has changed. I love the dynamism of it right now. There are so many fun places to go as a family. At the same time, I feel that the “weird” and less-structured fun is harder to find. When I pitched the book to publishers, I would note the growing population as a selling point, well aware that Austinites have always seen their city as a “town.” My daughter corrected me just yesterday though and said, “Mom, Austin is not a town. It’s a city.” She’s right. She’s growing up in a new Austin.

LiveMom: Have your kids been involved in the process? If so, how?

Annette: I have two kids – my daughter is ten and my son is eight. They were much younger when we started “officially” exploring four years ago, so not only have we tested all of the activities and events in the book but we have tested nearly all of the age spans for the entries too! They have been the greatest help from the very beginning.

I found that I needed their “kid eyes” to truly see the places I was going to write about. (Who knew that the most impressive part of the State Capitol is its floor tile patterns, and the bronze statues outside are for dancing with?) As I took notes, I would hand them a notepad, or a camera, after they finished playing, and they would capture the outings in such fun ways.

They have gotten to be pretty good critics too. We can sit down at a restaurant or enter a museum, scope it out, play around and try things, and then they will rattle off the “good” and “not so good” aspects for kids. Even now with the marketing materials, my daughter designed the boots logo for the press and she offers her artistic advice. In fact, my son feels so invested in the project that he was surprised not to find his name as co-author on the cover!

LiveMom:  What was the hardest thing about getting the book published?

Annette: Despite how much it seems Austin is growing, publishers see it is a “small, niche” market. In the grand scheme of things, we are – and I’m glad for this.

But it did make it tricky to publish. Ultimately, I decided to independently publish. In the process, I have learned so much and it has been great to be involved every step of the way, from cover design and layout to font choice and indexing. It was also neat collaborating with others to make the vision real.

LiveMom: What is your idea of a perfect family-friendly day in Austin?

Annette: Riding the Zilker Zephyr is my all-time favorite. Or doing something outdoorsy, whether it’s kayaking together, picnicking near a creek, or hiking (we’ve found it’s more fun if we take friends). For the cherry on top, my kids would add a trip to Amy’s Ice Cream or Big Top Candy Shop!

LiveMom: What would you change about Austin if you could?

Annette: I would bring back the hippies and the weekend porch stoop guitarists. I would like to see it be easier to get across town without traffic. What would be incredible would be bike-only roads and pathways that kids could use too.

LiveMom: Now that the book is being released, what do you see as your next “chapter”?

Annette: Now I get to do fun events and meet all kinds of neat people! Beyond that, I am waiting to see where life leads. I have some ideas – children’s nonfiction, school gardening, helping to build the new branch of a swim camp on Inks Lake, writing a book of day trips (my husband is still warming to this idea). I usually wait to follow my inspiration, and so far it has led me down some pretty great paths.

LiveMom: Is there anything else we should know about the book?

Annette: The book will also be available in app form on March 1st for $7, to make it easy to find places while you’re out and about. You are also all invited to the book launch party! More info will be posted soon on Facebook, Twitter, and Exploring Austin with Kids on the web.

What’s your idea of a perfect Austin day with the family?

Disclosure: Annette provided LiveMom with a free advance review copy of Exploring Austin with Kids to check out. The opinions expressed above are our own.