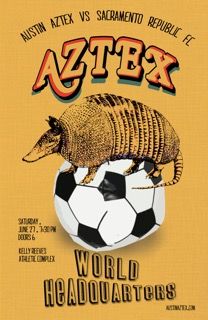 The games are family-friendly and offer a unique game day experience with live music, various delicious food trucks for concessions, activities for kids including small sided games, a jumping castle, and much more!

The Austin Aztex competes in USL under the helm of head coach Paul Dalglish. The team played in the USL Premier Development League (PDL) from 2012-2014 and won the 2013 League Championship in just their second year in operation, earning the USL PDL Franchise of the Year award. The Aztex finished each USL PDL among the top ten highest-drawing teams in the league and drew a record crowd of 4,754 in the 2014 playoffs.

They have six remaining home games for the regular season with the last game being played September 5. Ticket prices are available at $15-$25 for adults, $10-$20 for children 12 and under along with military and students, children under the age of three are free, and VIP seating is $70 per ticket. On-site parking is $5. Tickets are available for purchase at www.austinaztex.com.

Hop on the train! Austin Aztex are offering FREE rides to ticket holders on Capital Metro’s MetroRail service for the remainder of their 2015 regular season home games at the Kelly Reeves Athletic Complex in North Austin. The team will have shuttles taking fans from the Lakeline MetroRail Station to the game and will shuttle fans back after the game ends.

To ride for free, ticket holders will need to do the following:

1.       Visit www.austinaztex.com/capmetro and print the free pass, located in the link.

2.       Tickets available for purchase at this link. All riders must show the free pass AND a game ticket for that day in order to ride at no charge.

4.       Find the Aztex Shuttle sign at the Lakeline MetroRail station and wait for the shuttle.

Aztex will then provide a free shuttle from the Lakeline Station to Kelly Reeves and back to the Lakeline   Station between 6-11 p.m. (Shortly after 11 p.m. is the LAST train southbound).

Would you like to win a family four pack of tickets to see the Austin Aztex?