When I was new to Austin and someone gave me a DVD from the Biscuit Brothers, I wasn’t sure what to expect.  But in short order, the combination of little-kid-friendly music education programming and adult-friendly quips and parodies made it our household’s favorite whole-family TV show.  Not since The Muppet Show have families been treated to such a well-rounded set of characters and adventures. There’s a certain magic to making grown-ups laugh while also being heartwarming and sweet.

That first year, watching the show on KLRU, I happened to see an ad for a music festival that would take place at Pioneer Farms: the real-life set for the show.  I couldn’t get tickets fast enough!  Letting my daughter – and let’s be honest, me – come play on the “Magical Musical Farm” was too good to pass up! I had no idea at the time that I’d end up volunteering for the group.  I also had no idea at the time that they donate the show to KLRU and other PBS stations for free, getting funding only from sales of DVDs and CDs plus these occasional paid concerts.  I’m honoured every time I can help out, donate, or attend an event, because The Biscuit Brothers are hands-down the best family gig in Austin! 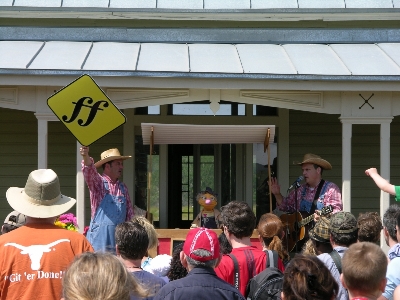 Whether you’re a long-time fan or just hearing about the show for the first time in this post, you’re going to want to come to the Austin Family Music Festival.  This year it’s on Saturday, April 21, from 10 am to 3 pm at Pioneer Farms in north Austin.  Pioneer Farms is a living history museum, full of real animals, historic buildings, and volunteer-run demonstrations.  It’ll be up and running as that and the “Magical Musical Farm” all at once during the festival!

There will be two stages filled with family-friendly music from the likes of the Magnificent VII Swing Band, 3rd Generation, mariachis, and Japanese drums.  Tiny Scarecrow will make a special appearance – something unique to Biscuit events on the farm.  I’ve heard a rumor that some wacky group calling themselves the Mysterious Muffin Men will pop up at some point…nobody’s quite sure what that means but it’s bound to be exciting! 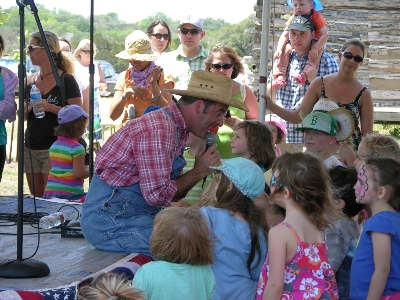 There will also be an Instrument Petting Zoo and other hands-on musical activities, plus musical hayrides, crafts, food, and more.  Austin Family News Magazine will hand out free festival CDs (while supplies last).

Tickets are $12 online in advance at http://austinfamilymusicfestival.com or $14 at the gate, all ages, with all proceeds benefiting the Biscuit Brothers Television Project and Pioneer Farms.  You get a day filled with fun and music while helping two of Austin’s greatest family treasures.  Win-win!

And one lucky LiveMom family will get to go for free!  The Biscuit Brothers have donated a family four-pack for a giveaway!  Details below.

Hope to see you there!

GIVEAWAY: What do you have to do to win the family four-pack of tickets? Leave a comment below or fill out the form by Saturday, March 31, 2012 at 9:00am. A random winner will be chosen and contacted via email. Only one entry per household, please.

About the author: Kimberly Chapman is a mother, author, crafter, and activist. Originally from Canada, she now resides in Austin with her Aussie-Kiwi husband and multi-citizenship daughter. She has a double-major degree in Journalism and Anthropology but at heart is a science geek as evidenced by her knitted DNA, scifi and Monty Python cakes, and fantasy/science fiction novels. Ridiculous volumes of information on her works – including lots of free craft patterns and tutorials – are available at kimberlychapman.com.

This giveaway is now closed. Thanks to all who entered!