When my son went in for his seven-year checkup, I was shocked to learn that he had gained 15 pounds from the previous year’s visit. (He had also grown four inches, but that was overshadowed in my mind by the other number.) Fifteen pounds is a lot for anyone to gain in a year, but for some reason it seems monumental when you’re talking about someone who’s only been on the planet for seven years. 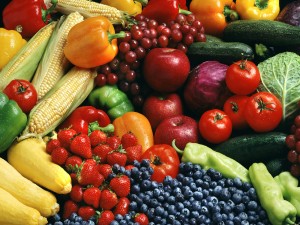 The doctor was concerned — this gain made his BMI creep up a bit into the high end of the normal range — and she began grilling him about what kinds of foods he liked to eat and what kinds of activity he likes to do. The basic rule of thumb she gave him/us — and I don’t disagree — that it’s a good idea to eat lots of fruits and vegetables and also to avoid/minimize consumption of foods you have to unwrap in order to eat. As we stood in that exam room, I did a mental inventory of our pantry — granola bars, crackers, chips — and grimaced. It was embarrassing to think about how much processed food, processed carbohydrates in particular, I rely on in order to get us fed on a weekly basis, despite my best efforts to get some nutritious stuff down the family’s collective gullet. (I won’t comment in depth about the effect this had on my son, but I will note that this inspired no small amount of anxiety in him that, while it eventually faded, made him very nervous about what kinds of foods he was eating.)

Since then, I’ve been much more aware of how balanced (or unbalanced, depending on how busy I am and how on the ball I was while making the weekly grocery list) my kids’ meals are, and have been taking a hard line on things like snacks and treats. Sometimes I’m more successful than others, but here are some of the rules of my kitchen these days:

The other piece is exercise. Given their druthers, my kids would win gold medals in couching. These kids are avid consumers of (appropriate) pop culture, from Adventure Time to My Little Pony to Skylanders. But as the weather is getting a bit more palatable, we’ll be doing a lot of biking, swimming, and just running around at the park. I’m not going to be a calorie-counting, eating-disorder-projecting psycho mom obsessing over every ounce of her kids’ body fat. But I will be modeling good eating habits and involving them in as much physical activity as possible.

2 Comments on Healthy Eating and Exercising with Kids