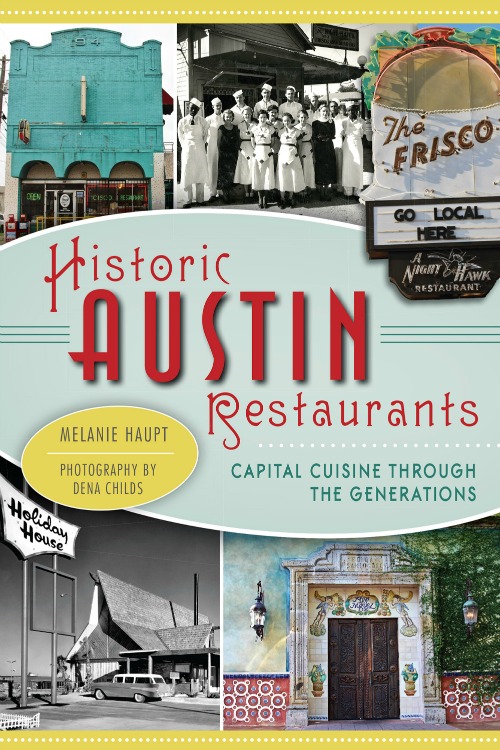 Admit it: when you have friends coming into town, do you mentally prepare a long list of places to take them, only to realize that you will be eating your way through their entire visit? I was relieved to learn that I wasn’t alone when I read that, according to a  2010 study by Bundle, Austinites spend almost twice the U.S. average on eating out.

Melanie Haupt, a LiveMom contributor, food critic for the Austin Chronicle and a member of Foodways Texas and the Austin Food Bloggers Alliance, spent several months a few years back talking with fellow food blogger Kathryn Hutchison about starting a blog to document the city’s iconic restaurants. As Melanie explains in her introduction, they were drawn to the idea of “preserving the experience of some of our favorite Austin landmarks before they were lost to the inevitable march of time.”

Although their initial conversations never bore fruit, the idea stayed with Melanie until she submitted a book proposal to a publisher late last year. In January, she got the green light, and spent the next six months researching for and writing the book. As she was writing, Melanie realized that “the history of Austin restaurants is, in many ways, the history of Austin itself.” Historic Austin Restaurants: Capital Cuisine Through the Generations was released on October 8, 2013.

Historic Austin Restaurants is arranged chronologically, beginning with the city’s founding back in the 1830s and continuing all the way to the present. The pages tell the story of Austin while featuring beloved gathering spots such as Scholz’s Garden, the Tavern, the Night Hawk, Holiday House, Green Pastures, Les Amis and Las Manitas. Melanie guesses that about half of the restaurants in the book are still open. “I didn’t want for the book to be a requiem for restaurants we’ve loved and lost,” explained Melanie, “rather a celebration of where we’ve been and how we’ve grown as a city and how our restaurant culture reflects that.” Interspersed throughout the book are interviews with long-time Austinites who recall their favorite memories about dining out in years gone by.

Among the restaurants which Melanie considers to be important to Austin’s history are Matt’s El Rancho, Fonda San Miguel, The Hoffbrau and Uchi. “I hope that after people read my book, they’ll understand the profound cultural importance of places like those, and maybe even reflect on how different Austin would be without them,” Melanie shared. She points to the passing of Les Amis and Las Manitas as two examples. “That (the closure of Las Manitas) was an enormous loss to Austin culture and, quite frankly, it’s a black mark on our city that we let it slip through our fingers,” Melanie lamented. At the same time, she recognized all the people who worked so hard to try to save it.

What were some of the highlights of Melanie’s journey through our city’s cuisine? She counts the huevos Mexicanos with crispy bacon at Joe’s Bakery, the cochinita pibil at Fonda San Miguel, the pigs in a blanket at Contigo and the strawberry-rhubarb pie at Quack’s as some of her favorites. She also adds the chicken fried steak with scalloped potatoes and broccoli rice casserole from Threadgill’s to the list. “Why not?” Melanie asked. “You’re already eating breaded, deep-fried beef. Might as well go for broke.”

Now that Historic Austin Restaurants is in print, Melanie’s already thinking about a follow up to address all of the stories she wasn’t able to include in the first book. When I asked her what she sees in the future of the Austin restaurant scene, she admitted that “I’m terrible at predicting trends, but I will tell you what I hope to see. I would really like to see more people like Tyson Cole, Aaron Franklin, and Steven Dilley (of Bufalina) becoming masters of their craft and raising the bar for a particular dish or cuisine. I think we’ve relegated blue-collar professions like plumbers, electricians, and carpenters to those who achieve Master-level skills, but I think that there’s something to be said for dedicating yourself wholeheartedly to perfecting the craft of something as simple as a barbecued brisket or a Neapolitan pizza. I’d love to see where the crazy dreamers in this town can take their singular culinary passions.” She also added that she’d like to see more women in leadership roles in some of the top kitchens in town and opening butcher shops.

Whatever the future holds, Historic Austin Restaurants will please every palate, encourage you to get out there and patronize some local establishments and make you want to go back for seconds.

For more information on the book and to buy a copy, you can visit Melanie’s book website. She will also be at the following events to celebrate the book’s release: