Some of us parents, in our former lives, enjoyed dining at new and exciting restaurants weekly, heading out after work for tapas and a drink, and the occasional jaunt to a Michelin-star restaurant. Of course, that gets exponentially more difficult with a kid in tow.

In the early weeks of our daughter’s life, my husband and I were able to tote her to nice restaurants, and she’d snooze away in her car seat while we enjoyed our meal. But, alas, that stage didn’t last forever. Two-year-olds rarely sleep in restaurants (tantrums are a much more likely occurrence), and forget being out after bedtime… which puts our old dinners at 9 pm very much in the “no” category these days.

So what’s to be done? Stop eating out at nice places? Trade wine lists for playscapes? Not so fast. We’ve come up with some pretty good strategies in our time as foodie parents, and, although we stick to home-cooked meals and less-fancy restaurants more these days, we do go out to nice dinners with the little one in tow.

I’m not the only foodie parent in town, though. For the best tips and tricks, and recommendations on where to get a delicious meal with your kids, I turned to members of Austin Food Blogger Alliance, because who knows dining out with kids better than food bloggers who also happen to be parents? Here are some tips for making the eating-out experience a good one for everyone involved, and a host of great restaurant recommendations, too!

Go early. As most experienced parents know, the earlier it is in the evening, the less likely you are to get the side-eye from fellow diners for bringing a child into a restaurant, even a nice one.

“If you go early and give them a heads-up, Lenoir is kid-friendly,” says Jennie Chen of MisoHungry.

In our experience, the time from around 5 to 7 pm is the “kid hour,” and you will hardly ever be the only table with a high chair or booster seat. If your child has a later bedtime and can be well-behaved in a restaurant at a later hour, go for it… but we like to play it safe.

Pick your restaurants. If you’re worried about crashing a too-nice place with a quiet, romantic vibe by bringing your rambunctious toddler, just make sure you do your due diligence before dining. The easiest way to ascertain if a restaurant is family-friendly is to call ahead and ask if they have high chairs or booster seats available. You would be surprised — some very tony spots do.

Melanie Haupt of My Rubberbandball (and a contributor to LiveMom) recommends Contigo, Pinthouse, ASTI Trattoria (if you go early), House Pizzeria and the Tavern. Her favorite, though, is Mandola’s. “[There’s] wine for mommy, free gelato (with a meal) for the kids, plus the big green space at the Triangle that they can gambol around on after they get all sugared up with their free gelato.”

“I love Pieous,” says Elizabeth Van Huffel of Local Savour. “[It has] great food, an easy atmosphere, [and it’s] very kid-friendly with a large chalkboard for kiddos to draw on.” She adds that there is beer and wine on tap — what’s not to love?

“We love Rounders on 6th for pizza with our daughter,” says Maggie Louise Callahan of Maggie Louise Bakes. She notes that there tend to be lots of other kids running around, there are vintage video games on offer and the staff is friendly.

None of that is not to say, however, that you have to limit yourself to places that cater to kids. Megan Myers of Stetted has been taking her 5-year-old son to restaurants since he was a baby. “I’ve had great experiences with my kid at Olive & June, Parkside and ASTI,” she says.

Speaking of Olive & June, Michelle Cheng of Foodie is the New Forty tipped us off that their Sunday Dinner is family-friendly and free for kids under 12!

Other foodie best bets include La Condesa, in.gredients, Snack Bar, Angel’s Icehouse, Flores Mexican, Verde’s Mexican Parilla and Jack Allen’s Kitchen. One of our latest favorites is Reunion Grille in Cedar Park, which, in addition to a delicious menu, offers a massive outdoor area with plenty to occupy the kids (including, some days, a balloon artist). 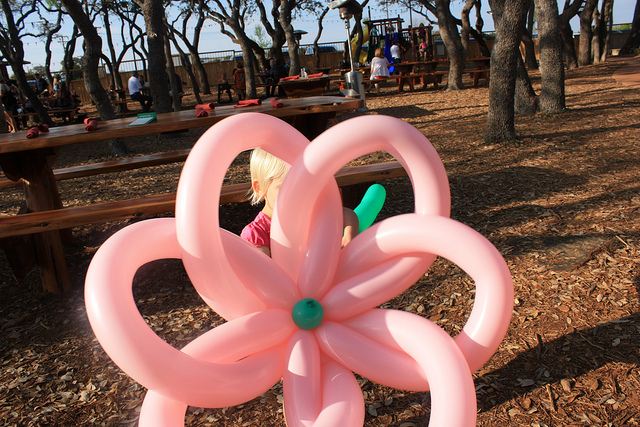 Work on manners. Start young! If your little ones learn early on that things like standing up in a high chair, yelling or playing with food aren’t okay even in casual settings, they’ll behave much better in a nice restaurant once you’re ready to venture out.

“I started taking my kids out to nice restaurants quite young,” says Lindsay Shugerman of A is for Austin. “But even before that, I insisted on good behavior in casual restaurants.” Of course, there always needs to be a Plan B in parenting, so in the event of bad behavior or a meltdown, Shugerman and her husband would tag team it, taking the offender outside to calm down and return later. Once her kids were a little older, they started venturing to nicer restaurants as a family. “When we got to the nicer places, they already knew good restaurant rules,” says Shurgerman. “Also, I would talk up the planned visit to a nice place, saying how grown up they were to be able to go. That registers even with three-year-olds!”

Alissa Leenher of SAHMmelier says she usually sticks to casual restaurants (preferably with outdoor seating) when she takes her two children out to eat, like Chuy’s, Home Slice or Contigo. “When we do go for a nice meal, we make a big deal about ‘date night,’” she says, focusing on dressing up and using manners.

Keep them busy. Boredom is often the culprit when kids act out in public, so be proactive and make sure they have plenty to keep them busy while you wait for your meal.

Leenher always brings what she calls her “bag of tricks” out to restaurants, stuffed with coloring books and other goodies. “Also, I bribe them with splitting a lemonade,” she says, “but they have to drink down half their water to make room for it.” As a last resort, she pulls out the smartphone — apps and photos go a long way toward quiet kids!

Myers swears by calm, gentle redirection to prevent meltdowns. “When my son would get too wiggly we would take him outside or let him play with a small toy at the table, ” she says, adding that the rule was that the toy got put away once the meal came. “We always make sure to involve him in the conversation or the meal, because that helps distract him from becoming unruly.”

Callahan also has a can’t-fail tip for dining out with kids: “Take them when they are hungry!” she says. “They will be occupied with eating the meal. Simple but true.”

Get a sitter. Sometimes, though, based on your child’s temperament and/or the mood of the place you want to dine, there’s nothing for it. You just have to find a loving adult (or a trusted teenager) and let them take care of your little one for a while so you can have a nice evening out without the distraction of caring for a child. Sometimes we all need a little break! 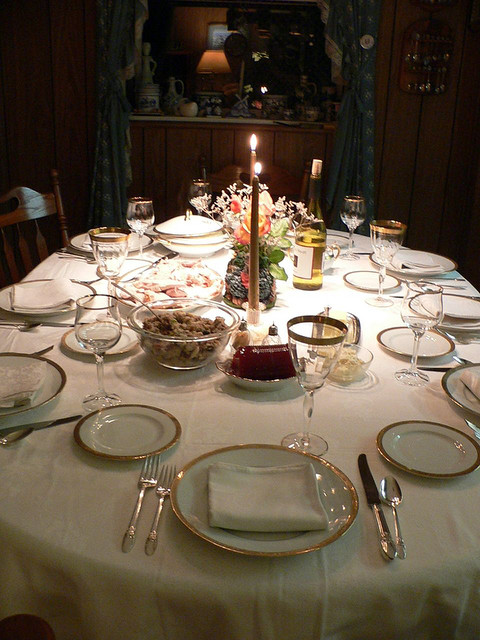 3 Comments on Little Gourmets: Tips and Tricks for Dining out with Your Kids