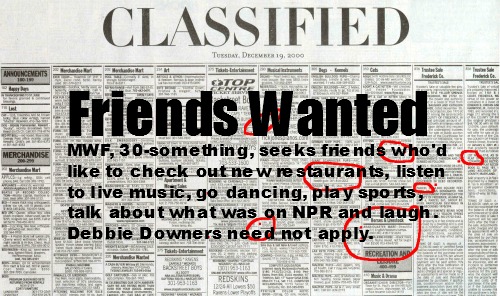 I think it would be fair to say I’m a strong extrovert.

This is one of the reasons becoming a parent totally rocked my world. Gone were the days of being out every night at a different social function. As I slipped into that parenting-an-infant fog, I spent more time at home since we had moved in. I discovered exactly when the mail arrived. I found I couldn’t hang with single friends who went out for late dinners and were never confronted with that awful realization: Did I remember to take a shower today? When my introverted husband would return home from work, he did his best to digest the onslaught of chatter I dished out with his dinner.

I still remember the first night we came home from the hospital after my son was born and my husband said, “Now I understand what everyone says about your world totally changing.” We talked about how we were now part of this new-to-us club, along with our friends who we had grown apart from who had had kids before we did. It was as if an earthquake suddenly split the earth in front of our doorstep and on the other side, across the divide, were all the friends who were single and/or kidless who we now saw through a new lens. I unwittingly entered a different reality which I was just beginning to understand.

Inside, I ached to be out in the world. Paralyzed by a perhaps irrational fear of taking a fussy baby out, I stayed in. I found a community in listservs populated with other moms who were up at all hours of the night, nursing. At the urging of my sister-in-law, I joined Facebook. I signed “us” up for classes (I think you can get away with speaking in the plural when your partner in crime is still speaking in Babble-ese). After I got over my fear of leaving the house with my child, I began attending a weekly playgroup.

Over time, I came to realize that I needed my friends as much as I needed food and exercise. As I emerged from the sleepless nights of babyhood into toddlerdom, I began to schedule a few nights a week so I could enjoy the company of others. In some cases, it was a moms’ night out, and we took turns gushing about our little charges and bemoaning the brave new world that is modern parenting. Other nights, I met up with old colleagues and they updated me on all the funny stories which aren’t quite Facebook-worthy which we would have joked about for days at the office. One night, I realized that the glazed-over look on my (childless) former cubemate’s face was an indication she was not interested in hearing about the diaper blowout at the library.

Suddenly, I realized the ground was moving underneath my feet. Playgroup took a hiatus. A new mama friend decided to go back to work. The happy hour invitations from former co-workers dried up. My friendships, once again, were changing.

Then, a funny thing started happening. I spent less of my evenings talking about spit up and diapers and more time talking about music and books. My son let me know which friends he wanted to spend time with, and I found myself drifting away from some moms and towards others.

This pattern has happened, over and over again, over the last few years. A new job forces a family to move. A friend gets pregnant and is no longer up for getting a glass of wine. Without really planning or meaning to, our son is enrolled in three different preschools in three years. Elementary school begins soon afterwards.

What hasn’t changed though, is that I just enjoy being in the company of others. I lament drop off playdates because it seems that I never really get a chance to get to know the moms of my son’s friends. The few words we exchange in passing leave these women squarely in the acquaintance category. As many interesting women (and men) as I’ve had the opportunity to meet and get to know through interviews, conferences, lectures and other occasions, I still find myself wishing I had a friend who would want to go to something I find out about at the last minute. Despite my love of getting to know people, I always want a wing(wo)man, so sometimes I’m left to look at photos online after an event has taken place, wishing I had made it out.

Why is it that it’s hard to make friends as an adult? This article lays out a few requirements for making close friends: “proximity; repeated, unplanned interactions; and a setting that encourages people to let their guard down and confide in each other”. As parents, we are certainly not sitting still much (and we only have one child!), so the proximity piece does explain why we have grown close to our neighbors and why we can’t seem to see the friends who live across town. Repeated, unplanned interactions, outside of an office environment or a school, are few and far between when a sports season ends, when kids go on summer break and when routines are broken by illness and other interruptions. And the last condition: a gathering place that we can all let our guard down in…who has time for that?

Time may very well be our limiting factor. At it marches on, the number of hours in the day seem to literally disappear as I rush to hit Publish on this article. It’s hard to remember when I lounged poolside with college friends during Spring Break. Even with older kids, it’s hard to extricate myself from the piles of unfolded laundry, the unread emails in bold staring back at me from my inbox, the comfy bed and my forgiving yoga pants to hit the town or even grab a bottle of wine on the way to a friend’s house for a night in.

As much as life piles on, though, I don’t think I’ll ever be someone who says that “I don’t really have time for any more friends”, as I heard someone declare a while back. I’ll keep emailing and calling. I’ll keep finding fun things to do and making mental lists of who I might be able to cajole to bring along. If you don’t respond, that’s OK. Although I may not “get” it, I’ll probably be too busy trying to finish up my work so I can head out to notice.

4 Comments on The Challenge of Making Friends as an Adult