I still remember the first time I spoke on the phone to a dear friend after coming home from the hospital after the birth of my son. “Welcome to the club!” she said, excitedly. Club? Huh? This was not covered in the childbirth classes I attended, nor was it mentioned in the many books I read during my pregnancy.

I soon realized how right she was. We moms may not have a secret handshake, but we have the power to change another mom’s day with a sympathetic look when a toddler is melting down at the grocery store, a smile when opening the door for someone who clearly has her hands full (and her heart, probably, too) and a warm hug on those days when you can tell another mom at school pick-up is feeling overworked and underappreciated. When I find out another woman I just met is a mom, I instantly know that we will have plenty of things to talk about.

Yet, we spend so much time taking care of other people that we often don’t think to spend time on ourselves. We rush, from day to day, with a to do list that is never completed, thinking everyone else seems to have it figured out…except us.

In 2011, Trish Morrison decided that she wanted to create an opportunity for mothers to bond outside of the play date. MomCom began as a gathering of 60 women in early 2012 has grown into a day-long conference, with past keynotes by superstars such as Glennon Melton of Momastery.

The 2015 MomCom Conference will take place on Saturday, November 7, 2015 at the Westin Austin Downtown. Tickets are available online. Check out the schedule here.

These events are not about the carefully curated lives we can sometimes lead on social media. Speakers are encouraged to be open and honest about how motherhood has defined them and how behind the curtain, it can be tough to keep all the proverbial balls in the air. Some of these “ordinary moms” doing extraordinary work have forgotten about “opting in” or “opting out” of the workplace, but rather, have outlined their own course for creative, professional and parenting success. The sessions leave you feeling inspired about hopeful about your latest project, whether it’s starting up your own business, working your 9-5 job, doing some consulting on the side or raising your little ones.

The 2015 MomCom featured speakers include:

Rabia Chaudry is a wife, mother, attorney and International Security Fellow at the New America Foundation, where she heads the CVE (countering violent extremism) and community engagement project in partnership with Google and Facebook. She is a senior CVE consultant, with experience in international CVE evaluation projects and advocate training in Pakistan on the intersection of digital media and CVE. The focus of her CVE work is social media recruitment by violent extremists and law enforcement/community engagement.

Ms. Chaudry is also the President and founder of the Safe Nation Collaborative, a law enforcement training firm. Safe Nation Collaborative works on two fronts: providing CVE and cultural competency training to law enforcement, correctional, and homeland security officials, and providing national security and CVE training to Muslim communities and institutions. To date, Safe Nation has worked with the US Department of Homeland Security, US Department of Justice, the National Counter Terror Center, the Maryland State Police and Correctional Officer Training Commission, and local law enforcement agencies across the region.

Ms. Chaudry is a Fellow of the Truman National Security Project, a Fellow of the Shalom Hartman Institute, and a Fellow of the American Muslim Civic Leadership Institute. Ms. Chaudry currently serves on the Board of the ACLU of Maryland and is a frequent public speaker and writer on faith, gender national security, and social justice. Her writing appears in Time, Huffington Post, the Guardian, and many other outlets. She is also the co-creator and host of the globally popular podcast “Undisclosed: The State vs. Adnan Syed”.

Wendy Davis is an attorney, author, former Texas state senator, former city councilperson and the 2014 Texas Democratic gubernatorial nominee. Her public service career as an elected official spans three decades. From very humble beginnings, Wendy worked as a single parent to forge a path to college, beginning at community college and earning a scholarship to Texas Christian University where she graduated first in her class. Ultimately, Wendy graduated with honors from Harvard Law School. Wendy is widely recognized as a leader on women’s healthcare policy, and is best known for her historic 13 hour filibuster in the Texas Senate to kill a legislative effort that would have dramatically reduced women’s access to abortion care services in her state.

As a first generation college graduate, Wendy has worked hard under challenging circumstances to improve public and higher education in Texas. An important success in Wendy’s legislative career was her 2011 filibuster that she staged on the floor of the Texas Senate in an attempt to prevent dramatic funding cuts to Texas public schools. As a strong supporter of public education, Wendy co-authored an important law that enabled the growth of high performing charter schools in her state.

Noted for her talents as a legislative leader, in 2009 Wendy was named the Texas Legislature’s Rookie of the Year by Texas Monthly magazine and Freshman of the Year by AARP, was named to Texas Monthly’s Top Ten Best Legislators in 2013 and has received numerous awards, including the 2013 Women Who Dared award by the National Council of Jewish Women, the 2013 Champion for Social Change award by the Texas Association Against Sexual Assault and the 2011 Legislative Star by the Texas Classroom Teachers Association.Despite her well known work fighting for the opportunity for all Texans to realize their potential through education, employment and healthcare, Wendy is most proud of her role as mother to her daughters Amber (32) and Dru (26). Wendy lives in both Fort Worth and Austin, Texas.

Betty Lochner is the director of Washington’s Guaranteed Education Tuition (GET) program, a division of the Washington Student Achievement Council. She oversees all program responsibilities, including daily operations, marketing and media relations, finance and records, customer service, actuarial analysis, and program policy. Under her fourteen years of leadership, the GET program has grown from 7,900 to over 153,000 accounts and is currently valued at over $2.5 billion. It is the fastest growing prepaid tuition program in the country. Lochner is a frequent guest on statewide television and radio interviews, speaking on behalf of Washington’s GET Program. She also serves as the Director of Organizational Development for the Council. Lochner is currently Chair of the Executive Board of the College Savings Plans Network (CSPN). She formerly served as Vice-Chair of the Executive Board and was the Chair of the National Communications Committee. The College Savings Plans Network is a national non-profit association and is the leading objective source of information about Section 529 College Savings Plans and Prepaid Tuition Plans. Lochner holds a Bachelor of Arts degree in Communications and a Master of Education degree from Western Washington University.

Additional speakers and sessions include:

The Myth of Perfection: Get Down and Dirty with Your Money

Not long ago, weight and health were off limits topics, and now everyone is talking about their steps, diet, and weight. We feel the same way about the control women have with their money—it is so important to our lives and well-being—-but few people talk about it! In this session, we will share stories of success and “failure”, talk about very different approaches to understand your learning style, balancing your personal and family goals and finding ways to control your future.  We will give you steps to learn from one another to leverage your strengths and put your future ahead of you.

Black and White: Motherhood and Race

This presentation will be conducted by two mothers, one black and one white, who have been examining issues of race and the criminal justice system both professionally and personally for more than a decade. They have learned the most about each other and about themselves as mothers first, and then as professionals and community leaders. Through formal presentation, group activities, and a lighthearted and informal conversation, the session will explore the nature of race, how we understand race, and their stories on race and motherhood.

Millennial Moms and Motherhood in the 21st Century

Anne Boysen will reflect on her own personal experiences and how they relate to the topics brought forth in a collage of news clips that have shaped childhood and childrearing in the first decade and a half of the 21st century. She will then move the talk into the present and future by focusing on millennial moms and current and future trends that will shape how they are raising their children and making life choices.

Every time you read a story about an amazing kid it is easy to dismiss them as a lucky kid. This panel of moms with extraordinary kids will explore how successful children are as much about creating an environment that helps them to succeed.

It’s this decade’s vagina. With more than 10,000 people a day turning 50, the “M” word is in the ether. A woman’s and mother’s last little dirty secret, The “M” Word is both an epoch and an experience. It is a passage and a destination. Anyway you slice it, it is no bullshit and it’s time to start talking about it NOW. The accompanying onslaught of revelation, a transcendent hurricane of hell, is marked by dehydration, blindness, irony, and wine. Lots and LOTS of wine. Join international fitness professional Laura Cisneros for a lively, wry and frank conversation about the other M word – MENOPAUSE.SEX. DRUGS. AND Whack-a-Mole.

In addition to the speakers and storytelling, guests will be able to enjoy breakout sessions covering topics such as:

Power in the Pivot: Taking Charge, Embracing Change and Doing What You Can

Hear Laura Beck, Carla Birnberg and Karen Greenberg  talk about what prompted each to launch her own business. They will discuss the advantages and pitfalls of going it alone professionally and how they survived professional break ups. The session will cover how their business ventures affected their personal lives as well as how their families and friends influenced business decisions. Laura, Carla and Karen will also share their perspectives on managing growth and knowing when it’s time to cash out

Redefining the Workplace: Insight from women in male-dominated professions 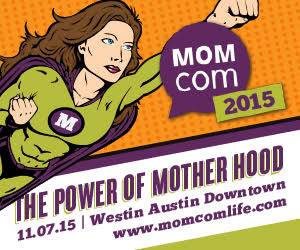 To receive $30 off your ticket to MomCom, visit the Registration Page, click on Enter Promotional Code and enter LiveMomCom15. But, hurry! The discount ends at midnight on Friday, October 30, 2015.

[author] [author_image timthumb=’on’]http://www.livemom.com/wp-content/uploads/2012/09/Nicole-Basham-Sara-Marzani-Photography-livemom.jpg[/author_image] [author_info]A native Austinite and soccer-playing mom, Nicole uses her 9-year-old son as an excuse to rediscover her hometown through his eyes. In Thoreau’s words, her mission is to “suck out all the marrow of life”, or in her son’s words, to cultivate in him a love of “advenchers”.[/author_info] [/author]