This is the second in our series of posts about what happened during the Texas legislative session for kids and families. Mommy Mob contributor and Texans Care for Children CEO Eileen Garcia has had as much first-hand perspective as anyone. A mom of two young boys, she also spends countless hours at the Capitol testifying at hearings about children’s issues, watching lawmakers debate at all hours, meeting with elected officials, and going to rallies and events.

Today’s post encapsulates her biggest takeaway from that experience. (Next week, we’ll get into specific highlights and new laws moms should know about.) The embedded video also tells the story of the session from the perspective of a new campaign Eileen mentions, a movement to ensure today’s mistakes in the legislature are not repeated. Finally, we’ve got another new “motivational” on the Mommy Mob page this week. It’s all about the one question you can ask every day—and how just the asking makes an impact.

The 140 days of our regular legislative session began in January and wrapped up (sort of) on May 30.  It did not come as a surprise to anyone that all the work of session did not get done during that fast and furious period that pops every two years.  What was a surprise was that a special session, a time-limited second try at passing laws, was set to begin immediately, the very next day, after the first session ended.

The regular session itself was a mixed bag in so many ways on so many issues.  It is not easy to come up with a pronouncement on how Texas kids fared, but if I am to be completely candid, not so good.  Some major wins did happen, but in the end all policy solutions were crippled by one overwhelming policy choice—passage of a very bad budget, one that in all the various forms it took as it was considered over session, was critically inadequate. 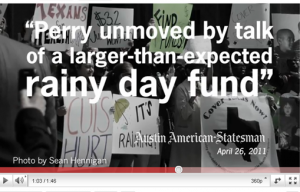 This loomed large as all policy proposals were considered.  While children and families had some significant wins, particularly in the area of juvenile justice, anything that cost anything was off the table from the start. Even things that didn’t cost anything, but were thought to, got squelched. In this way, the legislature tied its own hands. Rather than maximizing public policy as a way to come together to solve problems, they starved our infrastructure—choosing not to spend all of the Rainy Day Fund, a replenishing source of state savings; draw down our state’s share of federal dollars; create new revenue sources; or close tax loopholes that allow corporations to evade financial burdens that average Texans continue to shoulder.  But making government smaller, doesn’t shrink problems.  The result of blaming those services that legislators were charged with improving was a budget that leaves needs terribly unmet in areas as critical as health, education, mental health, and the prevention of child abuse. The legislature failed to shore up our vital public structures, so essential to preserving the Texas successes we have built together and addressing the common challenges our communities face.

Where there was renewed hope was that this session many Texans—many for the first time—responded to legislator claims that Texans wanted fewer social safety nets and underfunded schools, by coming to the Capitol, picking up the phone, and generally letting legislators know that that was not what they were elected to do. These same angry Texans must now make sure that these legislators continue to hear from them—in their district offices and from messages sent via the voting booth.

The close of regular session is just the beginning.  There is ongoing work in special session and there will be continued work once agencies begin to implement the laws that have been passed.  We invite you to join us in the struggle, including through the new KidsWell Campaign, to improve the lives of Texas children and build a better future for all Texans.