“The Mothers’ Milk Bank at Austin is a non-profit organization whose mission is to accept, pasteurize and dispense donor human milk by physician prescription, primarily to premature and ill infants.”

I was invited to take a tour of the Mother’s Milk Bank at Austin a few weeks back. Being a local mom and an expecting mom, I thought it was something that would not only interest myself but also the LiveMom community. Going in, I thought that I had a good sense of what they did. In fact, there was much more to it than I thought.

For instance, did you know that our local milk bank serves 60 hospitals in 14 states? And did you know that 1/3 of an ounce is one meal for a premature baby? Not only is human donor milk safe, it also saves many lives.

Who can donate? The profile of a donor is a healthy, lactating mom up until one year after birth.

What’s the process to become a donor? The first step is to have a verbal interview over the phone. This takes about twelve minutes. You will be asked questions about your general lifestyle, medical history and travel history (to make sure you haven’t visited any countries recently that have exposed you to potentially dangerous diseases). The next step would be to fill out a written questionnaire, which takes about fifteen minutes and gives the Mother’s Milk Bank formal consent. You will need to provide two medical release forms: one from your prenatal care provider and one from your pediatrician. The last step would be to have lab work done at the Milk Bank’s expense at a location convenient to you. There is a 100 ounce requirement to become a local donor. 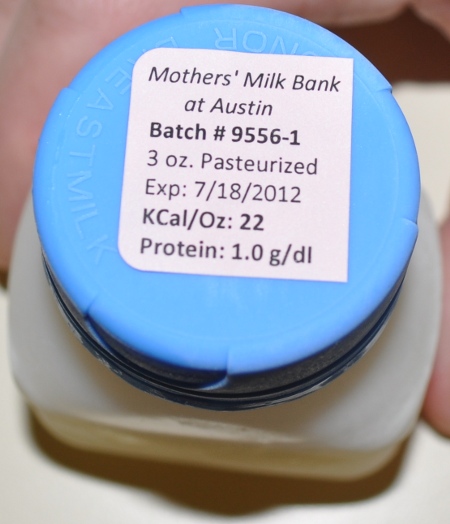 Do you have to live in Austin to donate? No! The Mother’s Milk Bank at Austin provides paid shipping and containers if you live outside of the area. If you live in Austin, there are several convenient locations to drop off your milk.

What happens to your milk after it is donated? The donated milk is poured into flasks and then a sample of each donated milk is then scanned by infrared spectroscopy (the MilkoScan) to determine the fat, protein, and lactose content, which can then be used to target the individual nutritional needs of sick or preterm babies. All bottles that are used are BPA-free and tamper-evident. The mixed pools of milk are then ready for pasteurization.  Pasteurization heats the milk to 62.5 °C for 30 minutes to kill viruses and bacteria that could be harmful to fragile infants, while retaining most of the milk’s beneficial components. Milk is cultured before and after pasteurization to ensure absence of bacteria and then is stored in a deep freeze until dispensed to hospitals and outpatient babies. 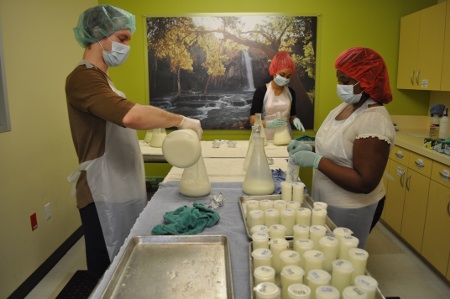 Who gets this precious milk? The Human Donor Milk is used for critical and sick babies first. There is more information on how to get milk for your baby here.

Unfortunately, all of the babies who could use breast milk aren’t able to get it. Why? There aren’t as many donors as they need. This is where you come in. The Mother’s Milk Bank at Austin has set of goal for 2011 of 500 donors. They are 85 away from meeting that goal. Can you help? It’s the next best thing you can do after giving birth!

Special thanks to Anne and Kim for your time!