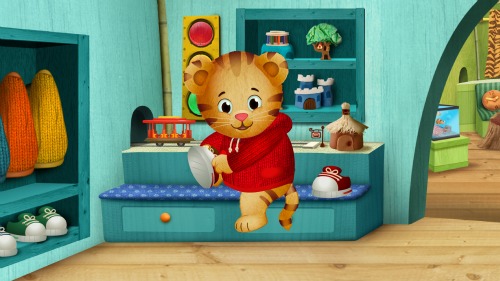 Spring Break tends to be a week when the TV is on more than usual. Cue the mommy guilt.

It’s no secret that PBSKIDS stands out as a trusted source for children’s media for many parents. With no commercials and high-quality programming, it was really the only channel on during my son’s waking hours during his preschool years. And yes, on those days I left the TV on longer than I would have liked, my mommy guilt was a tad bit less pronounced knowing he wasn’t watching a show with obnoxious tweens or with the cheesiest dialogue and laugh track known to man.

I had the opportunity to attend an event during South by Southwest’s Interactive Festival “The Cool Kids – What’s New for Today’s Digital Kids”, hosted by PBSKIDS. I learned about plans to increase access to educational apps to lower-income children and about a new show which will premiere in the fall.

Citing a recent study, Sara DeWitt, a Senior Director at PBSKIDS, shared that there is a growing “app gap” — namely, that teachers almost universally agree technology is important to enhance learning in the classroom, yet educators in low-income communities lack access due scarce funding. PBSKids already offers over a dozen apps on its website (4 of which are free), but has now partnered with the Corporation for Public Broadcasting to bring free apps to lower-income kids through Head Start Centers, local PBS stations and other organizations working in underserved communities across the country.

Daniel Tiger’s Neighborhood reminded me of Mister Rogers, the Next Generation. Essentially, Daniel in the original Mister Rogers now has a four-year old son, Daniel, Jr. (who is just referred to as Daniel in this show). Daniel is the star of this new show, which is also set in the Neighborhood, a magical imaginary world. There are many characters from the old series who re-appear in this series and the theme song is very familiar.

At first, I cringed. Really? Mister Rogers? Does his show really need to be remade for today’s kids? But then I thought about it more. We are all nostalgic about what we loved as a child. We want to share those experiences and feelings with our children. Sometimes (not always), what we share from our past does not resonate with our children and their generation as they did with ours (case in point: the Muppets. I’ve never been able to get my kid interested, much to my chagrin). Then, I listened more to what Angela had to say. How PBSKIDS has partnered with the Fred Rogers Center and closely worked to imbue the new series with the values of the original show. How Daniel Tiger’s Neighborhood really addresses kids’ socioemotional needs. How thoughtful the shows’ creators and executives have been about really helping kids work through anxiety about doctors’ visits, childhood fears and challenges around such simple (but maddening, at least from a parent’s perspective) tasks as bedtime and routines. I left feeling confident that Daniel Tiger’s Neighborhood will honor Mister Roger’s legacy while creating the same quality content that we have come to expect from PBSKIDS shows….and comforted that the original show is always available for me to show my son.

During the Q&A, one attendee asked a great question about PBS and their target age range: 2-8. The question was about what PBSKIDS is doing to address kids at the upper end of that age range, the 6-8s. I agree that this is the age that kids seem to age out of PBSKIDS and move on to other much lower quality programming. Sara suggested we check out the PBSKIDS GO!, which has web original series, such as Chuck Vanderchuck’s “Something Something” Explosion! I’ll definitely need to check that out.

What do you think of the state of kids’ programming? Do you like PBSKIDS? Are their other channels you think are acceptable for the under 8 crowd? Any shows to suggest for a 6-year-old?

Disclosure: Attendees received breakfast plus a PBSKids t-shirt, a Dinosaur Train DVD, a $10 iTunes gift card to check out the PBSKids iPad apps and a Dinosaur Train figurine. This post was not sponsored by PBSKids, but we thought you’d like to know about what we learned about the new show and PBSKids’ efforts to get apps to low-income children.