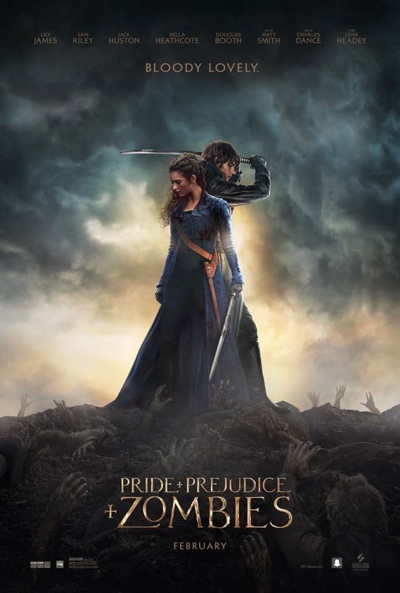 I’ve never read a Jane Austen book, and the only movie adaptations I’ve seen are Emma and Sense and Sensibility. If the tone of those are anything to go by, any die-hard Austen fan will need a healthy sense of humor to enjoy Pride and Prejudice and Zombies.

If you have one, this film is a lot of fun. It doesn’t mock the original material, but it necessarily takes many liberties. The five unmarried Bennet sisters are trained in martial arts at a Shaolin temple in China, prepared to defend themselves and others from the undead horde that infests a post-apocalyptic 19th century England. Mr. Darcy is a feared zombie-hunter who stalks through whist parties in black leather, releasing carrion flies to detect hidden zombies. Balls require extensive security preparations – what with all the tasty brains assembled in one place. There are fight scenes, zombie ambushes, and a siege. The heart of this film, though, is the drama between Lizzie Bennet and Mr. Darcy, and between Jane Bennet and Mr. Bingley. Both pairs play their roles seriously, in between slicing and dicing zombies. If you’re hoping for a hit of romance, including the gorgeous dresses and heartfelt letters, you won’t be let down.

If you have no attachment to Austen but enjoy zombie and action movies, don’t miss out on this one! The film as a whole doesn’t take itself too seriously, but doesn’t devolve into camp, and we had a great time seeing it. It’s rated PG-13 mostly for all the gore, but if you have a slightly younger kid who loves stage makeup and special effects, you might want to check this out. It’s not terribly scary, and there isn’t any sadistic violence. Just people trying to get through the day in a world besieged by animated rotting cadavers.

The trailer is a pretty good sample of what to expect, both in content and tone.

What I really appreciated: the film strongly supports women’s competence and autonomy. It encourages women who make their own choices about marriage, and judges harshly men who feel entitled to woman or just use them to achieve selfish goals. There’s one unfortunate scene in which the Bennet sisters are overly sexualized (getting ready for the ball), and one gag where Darcy cuts the buttons off Lizzie Bennet’s bodice during a fight, but those incidents seem quite out of place with the rest of the film’s respect for the Bennet sisters and other female characters.

Overall, Pride and Prejudice and Zombies is a light, fun, but still often touching movie that doesn’t take itself too seriously or devolve into camp. Characters learn and grow during the film, and the appropriately villainous villain gets his comeuppance. It’s perfect with popcorn. It opens today in theaters, so check it out if you have a chance!

LiveMom received passes for the advanced screening of Pride and Prejudice and Zombies. No compensation was received for this review.