The Intergalactic Nemesis: Twin Infinity
Long Center
In 2010, the Long Center launched the world’s first Live-Action Graphic Novel, The Intergalactic Nemesis. Since then, the project has toured the world. On September 5, the third and final installment in the trilogy will premiere. Are you ready for the adventure?
All ages.
September 5 & 6
8 p.m., Tickets from $29 and up.

Too Many Stories!
Scottish Rite Theater
With the help of the kids in the audience, a little girl named Callie outwits robbers Sam and Bogus through story, music, and improvisation. This popular touring show, which has delighted Austin Area kids over the past year, is back in the historic Scottish Rite Theater for three Sundays this September. Too Many Stories! is a lively, hilarious show for all ages, featuring Austin favorites Robert Deike, Chris Humphrey, and Katy Smaczniak. Playwright/director Susan Gayle Todd comments, “Imagine a touch of ‘Arabian Nights’ and a pinch of ‘The Ransom of Red Chief’ in a modern suburban setting.”
All ages.
September 7 – 21
Saturday and Sunday matinees (times vary, check schedule on Scottish Rite website)
$6 for kids ages 12 and under, $10 for those ages 13 and up.

Bunnicula
Scottish Rite Theater
Bunnicula looks like a typical cuddly rabbit, but he’s the spookiest bunny around! Kids will howl with laughter as Chester the cat and Harold the dog unravel the mystery. Live music, puppetry, and a stellar cast round out this Scottish Rite Halloween treat.
All ages.
September 27 – November 1
Sunday matinees (times vary, check schedule on Scottish Rite website)
$6 for kids ages 12 and under, $10 for those ages 13 and up.

Maid Marian in A Stolen Car

ZACH Theatre
GREATER TUNA creator and star of ZACH’s TRU, Jaston Williams shares a hilarious new play about his life on stage and behind the scenes. True stories like his first play in San Antonio, “Hamlet Con Queso,” will keep you in stitches!
Now through September 21

Henry V
Long Center
England’s most storied and inspirational warrior king is revealed in a one-man adaptation of the Shakespeare history starring B. Iden Payne Award-winning actor/director and Austin Chronicle Arts Editor Robert Faires. First presented five years ago to stunning critical and audience acclaim, Faires returns in a co-production of Austin Shakespeare and Red Then Productions.
September 4 – 14
Thurs. – Sat. shows at 8 pm, Sun. shows at 3pm, $23 and up.

The Orchid Flotilla
Salvage Vanguard Theatre
From the depths of lonely imagination arises a sensual and poetic narrative about the transformative power of companionship and a witty examination of disposable packaging. The flotilla is a tiny floating island of rubbish, adrift on a sea of blue plastic. Characters arise out of the depths in the form of human performers, manipulated objects, plastic junk masquerading as organic material, and human limbs manipulated as puppets.
September 4 – September 20
Thursdays—Saturdays, 8pm; Sundays, 6pm, $12-25 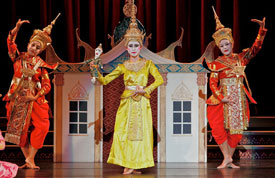 The King and I
ZACH Theatre
In its first Austin professional theatre staging in more than 25 years, the story of Anna and the King of Siam blossoms in a lush, new production created by ZACH, featuring lavish sets and costumes, Jerome Robbin’s legendary choreography, and an international cast backed by a live orchestra. This beloved musical is slated for a Broadway revival in 2015, but you will experience it first at ZACH!
September 17 – October 18
Evening shows at 7:30 p.m., weekend matinees at 2:30 p.m., $25 – $73

Evil Dead: The Musical
Long Center
Five college students go to an abandoned cabin in the woods, and accidentally unleash an evil force that turns them all into demons. It’s all up to Ash and his trusty chainsaw to save the day.  This musical comedy sensation takes all the elements of Sam Raimi’s cult classic films–Evil Dead, Evil Dead 2 and Army of Darkness–then combines them to make one of the craziest theatrical experiences of all time…and it’s the only musical in the world where audiences can sit in a “Splatter Zone!” and get drenched from the onstage mayhem.
September 17 – 21
Showtimes vary. Check Long Center site for schedule. $17 and up.

Bad Kid
Long Center
Bad Kid is the hilariously heartwarming tale of a goth boy who dreamed of being anywhere but the middle of Texas in 1991. The setting is specific but the story is universal as David Crabb reflects on rebellion, sexuality, friendship and what it means to grow up different and alone – just like everyone else.
September 24 – October 5
Showtimes vary. Check Long Center site for schedule. $17 and up.

Ballet Austin at the Long Center
Sparks fly in September as we open the season with two fantastic works, both with dramatic scores composed by Igor Stravinsky. The production begins with The Firebird, in all its vivid glory. Adapted from a Russian folk-tale, the Firebird gives her life for love, but ultimately rises from the ashes like a phoenix. Artistic Director Stephen Mills pairs this piece with George Balanchine’s Agon.
September 26, 27, &  28
Fri. and Sat. at 8pm, Sun. at 3pm, $15 and up.

Theatre Roundup for Kids and Adults for June 2015