I confess I like shortcuts. I prefer ponytails to blow-drying, Roomba to Swiffer, throwing important papers in messy-desk piles to neatly filing them away. If I were a women’s magazine, I’d say these were “time-saving efficiencies.” But shortcuts, a term hinting at just a little underlying laziness, feels more honest.

As moms, we’re supposed to shun shortcuts, right? Parenting is meant to be hard, or so I’m told. Each time work takes me to the Capitol, without fail, I’ll hear some elected official say: “That’s the parent’s job.” It doesn’t much matter what “that” is: remove carcinogens from the air, eliminate gang violence, detect lead-tainting in toys, reform health insurance. There are no shortcuts now: You. Are. A. Parent.

There’s a maddening double-standard, too. The same elected officials who make parents out as super-human—able to leap financial hurdles in a single bound; able to watch over children, guardian-angel like, every moment to prevent a youngster’s poor choice—these folks are the first to give big corporations a break. “We don’t need to be regulating how businesses market their products to children,” they’ll say. “It’s parents’ responsibility to decide what their kids see.”

So big businesses get to take shortcuts. Coke and Pepsi can go straight into schools to sell and display promotional materials or run ads on Channel One. Sugary cereals, sporting Dora the Explorer, get sold in grocery stores at preschoolers’ eye-level. McDonald’s sponsors classroom curriculum.

None of us should be surprised then by research last year that found, in Texas, by the time kids reach middle and high school, when they make more food purchases of their own, nearly all of them  drink not juice, not milk, but sugary junk daily. In fact, 35% of Texas boys drink three or more soft drinks a day: the equivalent of two pounds of sugar. Also disturbing: the researchers’ found that kids, and sometimes their parents, had no idea they were making unhealthy choices. The very teens and families that tried to eat well and exercise were being conned by drinks the color of fruit, marketed to athletes. They had little notion that, essentially, a liquid candy bar in terms of calories was getting served up with every meal.

In the great halls of the Texas legislature, so far this news has been met with a big yawn.  That doesn’t mean it doesn’t matter. I probably don’t need to tell you there’s a child obesity crisis, and now a million Texas kids are at risk of developing type 2 diabetes. Kicking the daily sugary-drink habit—that one little shortcut, even if it falls short of comprehensive nutrition and regular physical activity for all our kids—would be enough to help the average child who struggles with weight lose 5 pounds a year. In other words, this may be the easiest thing we can do to turn an epidemic around. 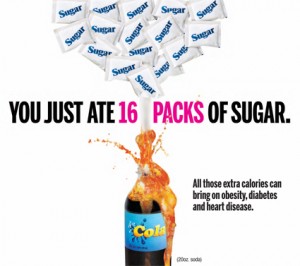 It doesn’t look like Texas is on the verge of creating a soda tax or banning the stuff from schools, nor are the feds on the verge of cracking down on junk food marketing to children. But it took a long time to get Joe Camel off the billboards, and that happened eventually. This will, too, with time and effort. If you’re interested in working to bring some change for kids and an end to all the shortcuts for Big Soda, I hope you’ll join me and Texans Care for Children in a movement for healthier choices for children.

1 Comment on Shortcuts, Sugar, and Showing Big Soda the Door