As you might have noticed, this summer we are running a few new regular features. On Wednesdays, we’re writing about taking on the city as tourists — even though we live here. So, we might write about packing up the family to check out a swimming hole, taking part in a tour or checking out a nearby resort for a staycation. Here’s to a summer full of exploring the best city around!

My kid’s a treasure hunter. If it shines, sparkles, crystallizes, or comes from underground, chances are it’s in my daughter’s room, a place overflowing with the special finds of a hundred nature walks (and the occasional trip with her allowance to Nature’s Treasures). So, when I told her we ought to beat the triple-digit heat by heading for one of the area’s nearby show caves or caverns, her first question was this apparent deal-breaker: “Are there crystals there I can find and keep?”

Now I’ve visited enough natural wonders in my lifetime to know the standard rule about taking “only pictures and memories.” Still, I told her I’d call Inner Space Cavern in Georgetown to find out. “Taking or touching anything from inside the cavern is strictly prohibited,” the woman on the phone said. “But we do have the Inner Space Mine, where kids can get a bag with sand and pan for gems.”

That did it. My daughter was in.

We arrived on a Wednesday morning, coupon in hand, and made our first stop at the playground and outside to meet the resident animals. Deer frolicked in the background, as a zebra and an exotic goat called an ibex came to to greet us, hoping we’d bought some feed inside.

Soon it was time for our tour. Walking into the cavern, we felt instantly cool and comfortable—it’s 72° inside. We also met some tiny, slumbering cave dwellers right away: the eastern pipistrelle, also known as the tricolored bat, for their black wings, brown backs and white bellies. These mini-bats usually hang out solo, not in colonies like our friends under the Ann Richards Bridge, so we spotted only a few them in the cavern.

Before long, we came to the first of many eye-popping cave formations. Water and time have carved all manner of shapes in the miles of underground limestone. There were, of course, stalactites and stalagmites (“You know the difference because you might trip on a stalagmite,” my 6-year-old informed me); columns where the two have grown together; ceiling “soda straws” and “bacon”; and giant flowstones. Many of the shapes were like puffy clouds in that they would morph in our imaginations, becoming whatever animal or mythical creature our guide suggested as she shined her flashlight on them. 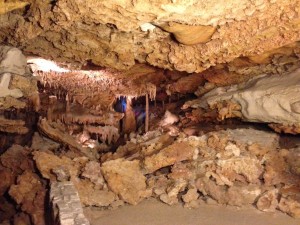 One of my favorite “rooms” held evidence that, millions of years ago, Central Texas was under water: the ceiling was a fossilized coral reef. More recent prehistoric life was found elsewhere in the cavern, and we got to see preserved fossils from mammoths, sabertooth cats, and other long-gone animals during our descent to 70 feet beneath the ground. At another point in the tour, the #1 rule was momentarily suspended, and kids got to touch a now-dead cave formation with their hands. (Living formations can’t be touched, because oils on the skin will keep them from growing.) 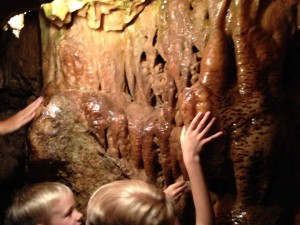 Near the end and with the group’s consent, the guide showed us what total darkness in the cavern is like: no lights, no cell phone twinkles, just giggling kids who couldn’t see so much as their hands waving in front of their faces.

The tour concluded with a walk back through the cavern and finally us tour-goers getting deposited at the gift shop (that’s a pet peeve of mine). Still, I have to admit the upcharge for the Inner Space Mine sift bag was worth it. My daughter loved putting handfuls of “mining rough” (sand with hidden goodies) through the sluice, delighting at every arrowhead, fossil, rock, and crystal that turned up. We even had some tree shade for the experience. All told, a successful day of treasure hunting and staying mostly out of the Texas heat.

If you go, Inner Space Cavern’s standard “Adventure Tour” is offered throughout the day (summer hours are 9 a.m. to 6 p.m.), and it lasts 1 hour, 15 minutes. The tour is $19.95 for adults, $11.95 for children, ages 4-12, and free for younger kids. Use the restroom before the tour, and plan ahead: no food, drinks, or strollers are allowed in the cavern. Other tours are also available, including an outdoor “Sister Caves Tour” at 10:30 a.m. daily in the summer for about half the price of the cavern tour (it won’t take you underground, however, and it’s not recommended for kids under 8). Bags of mining rough are $6 each, and it’s free to check out the animals; play on the playground; glimpse ammonite, mammoth fossils and other samples preserved in a glass case in the entry area; and meet this guy below. 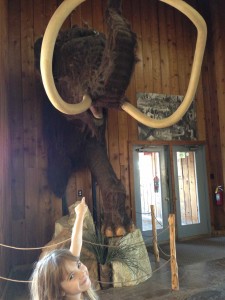 [author] [author_image timthumb=’on’]http://www.livemom.com/wp-content/uploads/2012/10/Christine_Sinatra.jpg[/author_image] [author_info] Christine Sinatra is communications director for a local nonprofit and has worked as a reporter for the Austin American-Statesman and the Oakland Tribune company, writing features.[/author_info] [/author]