I rode horses every summer as a kid. I wore my black Justin Ropers boots to school. “Family style” barbeque at The County Line was one of my favorite meals. I rode in the back of my dad’s pickup on occasion (gasp!). I went to a Clint Black concert.

That’s why I instantly shared the September 2012 “How to Raise a Texan” Texas Monthly cover on Facebook. Reading through their collection of stories brought back many memories of growing up and made me think a lot about how my identity as a Texan has changed over time. 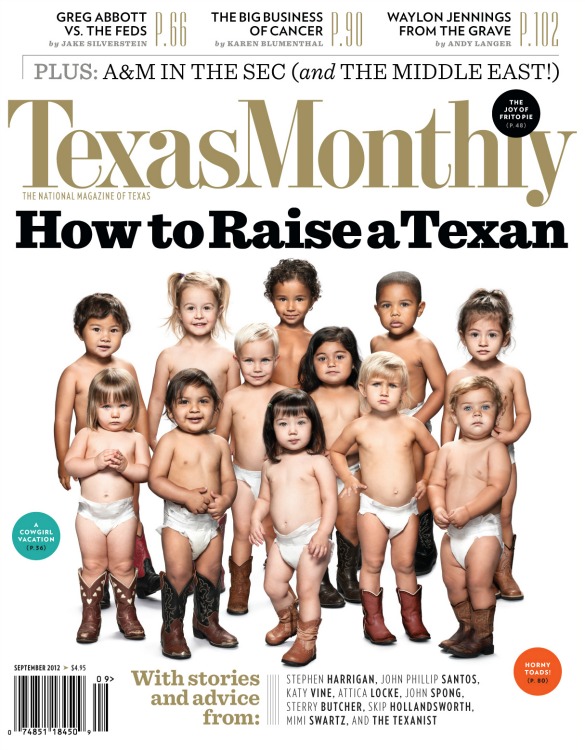 The release of the September issue coincided with a redesign of the magazine. I recently had a chance to talk to Jake Silverstein, Texas Monthly’s editor, about the issue, the magazine and how Texas Monthly engages its readership.

Texas Monthly has been around since 1973 and was always in my house growing up. Known for its in-depth reporting on issues such as politics, education and immigration, Texas Monthly also served as a “lifestyle” guide to restaurants, events, state parks and other things to do around the state. According to Jake, one in 8 adults in Texas reads the magazine and there is a loyal readership from Texans “in exile” (having been one of these at one time, I can attest to the bonds of this community of Texans living elsewhere). When I asked Jake how he would describe Texas Monthly’s niche, he replied, “We aim to bring a high quality, national-level publication to Texas because we see Texas as a nation in itself.”

He added that as a monthly print magazine, Texas Monthly can take the time and resources to delve deep into complex issues. As an example, Jake cited the July issue, which focused on the role water has played in our state’s history, going back 4,000 years. He also mentioned the August issue, which centered on women’s health. While admitting that women’s health is a politically thorny issue, Jake stressed both the importance of the subject and the necessity to address it in a comprehensive way. He cited the positive response to the issue as a testament to  the magazine’s ongoing role as a leader in civic journalism.

Back to the September issue. Ten writers have taken on what it means to raise a Texan, arranged chronologically in the issue from birth to leaving the nest. As a parent to two children, ages 2 and 5, I was curious as to how Jake absorbed the writer’s stories. Being a parent to younger children, he found himself identifying more with the articles about raising littler kids and found the stories oriented him as to what parenting will look like as his children grow older.

We talked a little about how Texas is changing, and I asked Jake whether he felt the identity of Texas and Texans will be diluted over time. Jake pointed out that many elements of what makes us Texans and what makes us unique have held steady over the years. He referenced one of the stories in the September issue by Mimi Swartz, a longtime Texas Monthly contributor and now Executive Editor, on her her son Sam’s departure to attend college in New York. On a return trip, Sam shows his roommates around and ends up having former governor Mark White sit down to chat with him and his friends one night at dinner. The story encapsulates the openness and friendliness you find in Texas, Jake argues, which is one of the reasons Texas is like no place else and one characteristic which has held steady over time. Jake asserted that raising the next generation of Texans is not just about the children themselves, but the fact that they will influence what this place will be like for years to come.

As I mentioned earlier, the September issue also marked a redesign of the magazine. Although Texas Monthly will continue its in-depth and longer-form stories, it has completely reworked the “front” of the magazine. In a nod to the evolution of media, Texas Monthly will have shorter articles which Jake compared to the appetizers before a main course. “Everyone likes the appetizers,” he explained. “Everyone orders the appetizers.” Jake hopes the readers devour every page, whether it serves up a recipe for frito pie or a full-page comic about a native Critter.

Texas Monthly takes its social media presence seriously. With over 30,000 Facebook fans, almost 50,000 followers on Twitter (where they recently hosted a TweetChat with Reps. Dan Patrick and Donna Howard on women’s health) and a growing audience on Tumblr, which gives readers a look behind-the-scenes, the magazine has several employees dedicated to engaging readers in a serious and fun way. Texas Monthly also has two apps dedicated to finding the best barbeque restaurants in the state (and beyond) and enjoying the outdoors.

It’s clear that Texas Monthly has evolved, while at the same time retaining its unique style of storytelling. I’m looking forward to keeping tabs on what happens across the state and outside of this bubble we call Austin and using the magazine as a constant reminder to me that being a Texan will always be a part of my son’s identity. Speaking of which, I have made the issue required reading for my non-Texas-bred husband and look forward to hearing his impressions.

Have you read the September issue? Are you a native Texan? How do you think parenting is different in the Lone Star State? What do you think it means to grow up in Texas today?

5 Comments on Texas Monthly on How to Raise a Texan