If you have been a patron of Family Connections, you probably already know the news. Last week, articles in the Chronicle, the Austin American-Statesman‘s Charity Chat and on KVUE revealed that the Austin nonprofit was closing during an investigation of financial irregularities. An article in Sunday’s Statesman went into much greater detail, describing events that led up to Louanne Aponte’s departure and the questions that still remain about years of financial data. 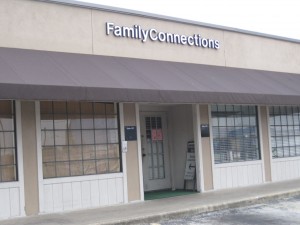 The title of the Statesman article was “Family Connections: the death of a nonprofit”, and for those of us who went there often, the feeling is accurate. Many of us registered our shock and sadness through our Facebook status updates. It all seemed so surreal. Some friends remembered the postpartum classes that got them through those difficult months after having a baby. Others fretted about the staff, many of whom continued to go to work for free in the days after the closure. One mama friend confessed that she felt awkward having items that were checked out from the library, comparing the situation to having personal effects of someone who has passed away. Yet another mom listed all the friends she and her son had made there and with whom they remain close.

The worst part was that it seemed so final — we were powerless to do anything to change the inevitable.

For those of you who never made it, Family Connections was a sanctuary for families. An agency which offered a bevy of classes for parents, childcare location services, storytimes, the annual Celebration of Families event (which I was going to cover for LiveMom), Family Connections was also a prime meeting spot. On rainy days, playgroups might gather around the pretend kitchen and make a meal or giggle upon donning bee and ladybug costumes. Moms could nurse their babies without feeling self-conscious. It was rare when I opened the door and didn’t see a familiar face.

Early emails from staff indicated that the only way Family Connections could be saved would be through another agency “adopting” them. Thus far, no news has surfaced and I would guess this would be a challenging funding climate for another nonprofit to take on the many pieces of the agency. A Facebook page, Friends of Family Connections, was created to “support the continuation the services Family Connections was providing”. Group members were encouraged to contact City officials to express support and attend a special meeting of the Early Childhood Council at 6:00pm TONIGHT (April 20th) at City Hall. To be added to the list of speakers, you can contact Ron Hubbard, Early Childhood Coordinator, at (512) 972-5028.

With the Help of PBS KIDS, It All Adds Up

Are You a Helicopter Mom?

5 Comments on The Closure of Family Connections