I am really not much of a baker. Besides that, I lack the artistic talent you really need to decorate professional-looking cookies. So, how on earth did I end up hosting a Halloween cookie decorating party? One word: kids.

Like so many things in my life as a mama, I never thought I’d find myself rolling out cookie dough, slaving over a double batch of icing and tinting it just the right colors the night before our little get-together, but I did. The things I will do for my child’s enjoyment!

Granted, at almost 2, my little one is a bit young to get tons of enjoyment out of cookie decorating, but she has some older playmates who get a kick out of it, and she certainly does enjoy eating the fruits of her labor.

For that reason — leaving aside competing concerns of taste and expediency — I like to make everything myself. Sure, I’m tempted to just pick up ready-made icing and a pack of sugar cookie dough from the grocery store, and the kids would have just as much fun, but I’d rather know exactly what they’re eating. I’m not a total stickler, though: I do use gel food coloring rather than the natural stuff for aesthetic reasons. Call me a rebel!

Disclosure: I suck at rolling anything out, including cookies. So take your advice from me with a grain of salt. These cookies taste great but (probably due to too much handling) they did spread a bit. Let’s just say some of my ghosts looked like they’d had a few too many cheeseburgers. The kids didn’t mind, though.

I did learn some lessons along the way, and, as a novice baker, I’m happy to pass them along. If you’re thinking of having your own cookie decorating party, listen up!

For the spreading issue, I realized after my first batch that I needed to make a few changes to keep the dough cooler and avoid the butter melted prior to baking. First, it’s better to refrigerate the dough in well-flattened disks, so you have less rolling to do once the dough is chilled. Make sure you use lots of flour to avoid sticking, and, most importantly, work quickly. Make sure the oven is already preheated, cut out those shapes, and get them on the cookie sheet. If you want to bake two sheets at once, put the first one in the fridge while you cut out the cookies for the second one. Then get them in the oven ASAP. Once I did those things, my cookies came out perfectly with no spreading at all.

I have a friend who is an accomplished home baker, and she recommended using royal icing (made up of meringue and powdered sugar). I chose Halloween-y colors (orange, black, green, white, and purple for good measure) and tinted the icing in batches. Then I divided each color roughly in half, added one half as-is to pastry bags with No. 4 tips for edging and decorating the cookies, and stirred a little extra water into the other half to make flood icing to fill in. Most of the flood icing went into squeeze bottles, but I reserved a little bit for the smaller kiddos and put it in small bowls with paintbrushes — much easier for toddlers to handle than a squeeze bottle. The drawback, of course, is that sometimes toddlers see those paintbrushes as a convenient implement for shoveling icing directly into their mouths.

In addition to the icing, I provided a variety of Halloween sprinkles and embellishments (all in one convenient canister that I picked up on the seasonal aisle) to finish off the effect. The kids had a blast, and so did the mamas. And, if I do say so myself, we decorated some pretty nice cookies.

Most importantly (to my mind at least), they tasted great. While I do enjoy plain old sugar cookies and all of their sweet-tastic goodness, I liked the idea of adding a little interest to my roll-out cookies, so I used half whole wheat flour and spiced them with cinnamon and cardamom. To complement the spiced cookies, I added a smidge of orange juice to the icing.

Enjoy, but keep in mind that if you do attempt this little experiment, your house is likely to look a little bit like a Halloween colored-icing bomb went off, complete with cookie crumb shrapnel, after the party is over. It’s all in good fun!

Recipe adapted from Guitar Picks and Apron Strings; Makes 2 dozen, so double it if you’re having a crowd!

Combine the flours, spices, and salt in a medium bowl and set aside. Beat the butter in the bowl of a stand mixer until creamy. Add the sugar and beat until the mixture is light and fluffy. Stir in the zest (if using), juice, and vanilla. Add the egg and beat for one minute on high.

Divide the dough into four flattened discs, wrap each in cling wrap, and refrigerate for at least 2 hours.

Preheat the oven to 350°. Working quickly on a well-floured surface, roll out the first dough disc to about the same thickness you would a pie crust.  Use cookie cutters to cut out your cookies and place them on a baking sheet lined with parchment paper or a silicone baking mat. Bake until light golden brown, about 12 minutes. Cook for a couple of minutes on the baking sheet, and then remove the cookies to a rack to cool completely.

Royal Icing
Recipe lightly adapted from All in One Bake Shop

3 Tbsp meringue powder
4 cups sifted confectioners’ sugar (about 1 lb)
6 Tbsp water (substitute orange juice for a flavor that complements the cookies, or you can use half vanilla extract) 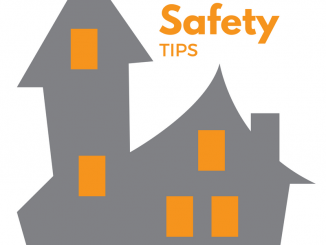 Halloween Safety Tips from the American Academy of Pediatrics