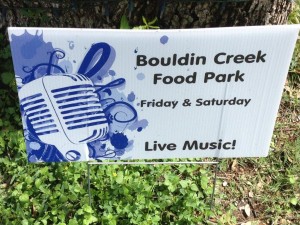 I have lived in Austin for nearly 12 years, and I love this city. There are so many varied activities and interests to pursue, I love the energy of its people, I love the weather, and I LOVE LOVE LOVE the dining options. I have been intrigued by the recent trend toward food trailers and specifically food trailer courts.

My family and I have enjoyed a taco or two or six at taco trailers near our home in Pflugerville, and we, of course, have enjoyed snow cones from the snow cone trailer that shows up at the Balcones District Park in Northwest Austin. We have yet, though, to make it down to the downtown area or South Lamar area where there are many food trailers to choose from. This is on our list of things to do, but with many family activities up North on the weekends, we just haven’t made it a priority to get down there and check out this unique dining option.

Fortunately, my husband, Josh, and a co-worker of his were more than happy to do a little recon for me during lunch recently. They headed down to the food trailers near 1st street. Josh found that his iPhone app, Austin Food Courts, was sorely out of date and listed many trailers that were no longer in existence. He and his co-worker also found that many trailers were closed during lunch during the week. After looking around and not finding what they wanted at first, they ended up at SoCo ToGo and had a great meal. Josh got the chicken fried chicken and fried okra and reports that he enjoyed both. He surprised himself with how much he enjoyed the fried okra as it is a dish he normally does not enjoy.

I asked a couple of veteran trailer diners which trailers they like best and which menu item is their favorite. One voted for Chi’lantro and their Kimchi Fries, and the other voted for East Side King, which has gotten a lot of attention for one of Chef Paul Qui’s brussel sprouts recipes.

How about you? What’s your favorite thing about Austin’s food trailers?