From 1998 to 2007, I lived in south Austin, and for the last four years of that, I had the good fortune to live in a neighborhood right across the highway from the Whip In. For the uninitiated, the Whip In is the best convenience store ever (confirmed by seven Austin Chronicle awards), but it’s really more than that. It’s a family-owned store, a local knowledge-base for beer and wine, a performance space, and now a restaurant serving a mix of Indian/Austin-influenced food. 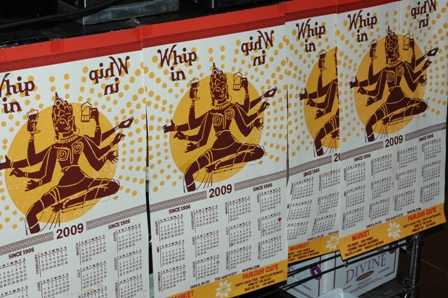 Catherine and I went and sampled some of the fare recently. Both of us really liked the food, especially the Queso con Chutney,  Cucumber Salad and Dal. The beers on tap were mighty inviting, and we enjoyed the smell of incense and sound of Indian music as we ate in the funky little dining space, furnished with an eclectic mix of church pews and other Craigslisted seating. Divided from the rest of the store by decorative screens and fabric, the area is small but cozy. Stop by and have a bite and a beer next time you’re near Oltorf and I-35. 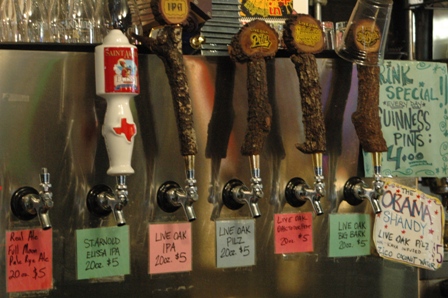 Below, my friend Arden Yingling, wine manager and wife of general manager, Dipak Topiwala (and fellow mom), answers our questions about the adventure of starting a restaurant and what she wants to do next, plus shares a recipe for one of the Whip In’s menu favorites. 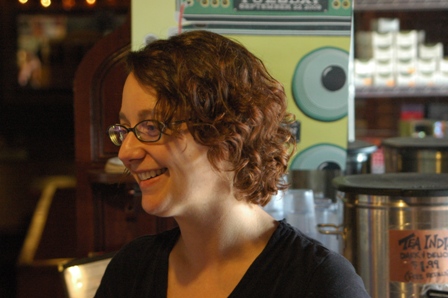 The Whip In was primarily a convenience store in the beginning, albeit one with an awesome beer and wine selection. What made you and Dipak want to get into the restaurant business? Was the rest of the family involved? If so, how?

Dipak has always been interested in opening a restaurant of some kind, although for many years his dream was pizza. Once he began managing the Whip In, it became apparent that there was a definite lack of Indian food in south Austin but plenty of interest in eating it. He and I have always loved his mother’s amazing cooking–years ago we dreamed of writing a cookbook based on her recipes. So when we put all that together, opening an Indian kitchen just seemed like the thing to do.

My mother-in-law became very involved once the kitchen was open. Many of the Whip In’s recipes come from her home kitchen, and she’s always done a large amount of the cooking. She’s still in the kitchen five days a week! 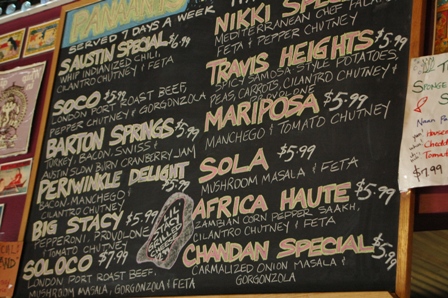 I love the mix of Austin and Indian influences in the food. How did you all come up with the menu?

The vegetarian rice bowl dishes are mostly traditional, with the rest of the menu being hybrid Texas-Indian creations. Most of the hybrid creations are from Dipak’s imagination, though they’re all grounded in the techniques and spice blending of the more traditional recipes.

Dipak’s family is from Gujarat in Western India, and the food there is quite different from most of what’s found in Indian restaurants in Austin. The family also lived for many years in Zambia, so there are African influences to some of the family recipes as well. Since we were already starting from a mixed-up culinary base that wouldn’t be familiar to most Austin diners, we decided to have fun and mix it up even more. There are no rules, other than that it must be tasty! 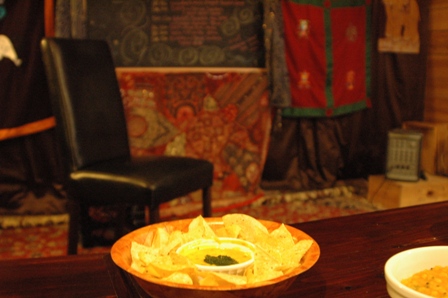 The conception was just a glimmer for a long while, but it was probably about two years from the time we really began working on it to the time the kitchen opened. It took much longer and was much more work than we expected, which I’m told is par for the course with restaurants. (Sounds sort of like parenting, huh?) Dealing with all of the city and state permitting was the most difficult part for sure, and caused the most delay. But once we got equipment installed, we got to start playing around with cooking, and that was definitely the most fun. I still walk into the kitchen sometimes and think “Wow! It’s a real kitchen!”

I still help with the cooking when there’s a need, and I’m the resident cookbook researcher (any excuse to consult my cookbook library!). But for the most part, my involvement with the food will just be eating it! I know the kitchen is in good hands, between my mother-in-law’s innate talent, my husband’s creativity, and our super capable staff.

Working with families as a postpartum doula feels like something I’ve been headed toward for years, as I’ve always been interested in issues related to women and families. Once I had my own daughter, and went through a rough postpartum period during which I wasn’t able to find the assistance I really needed, I began thinking about those issues even more.

It concerns me that so many new parents struggle and don’t know how to get past that difficult transition–and that many of them feel like they shouldn’t even talk about it, because having a baby is supposed to be perfect and magical! My goal is to take some of that pressure off by offering both practical and emotional support to new families. I love being able to make such a tangible difference in someone’s life, and I love the idea of helping create community for families, which I think we all really, really need. 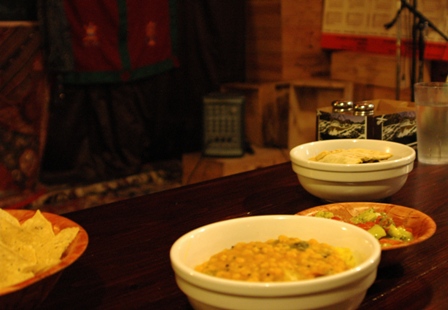 Place a 3- to 4-quart saucepan over medium-high heat. Add 1 tablespoon canola oil. When oil is hot, add the mustard and cumin seeds and cook a few minutes, until cumin seeds are golden and mustard seeds begin to pop.

Add ginger, jalapeno, turmeric, red chile, garam masala and salt. Stir well. When dal comes to a boil, reduce heat to medium and put a lid on the pot. Stir every 5 minutes or so to prevent sticking. As it cooks, the dal will turn yellow and begin to break down.

While dal is cooking, heat remaining 2 tablespoons oil in a frying pan over medium heat. Add diced onion and a pinch of salt and cook until onion is very soft and golden. When it’s done, pour onion and its cooking oil into the dal pot.

Cook until dal has completely broken down and is smooth and creamy, about 40-45 minutes. At this point, add spinach and cook a couple minutes more, until spinach is wilted but still bright green. Taste and adjust salt as necessary.

Serve over basmati rice as a main course, or on its own as a soup. Serves 4-6.

5 Comments on Thursday’s Dish: Spinach Dal from the Whip In