If you’re looking for a little something different for a mom’s night out, you might want to consider getting tickets to ZACH Theatre’s current production of the Tony Award-winning comedy, Vanya and Sonia and Masha and Spike.

Vanya and his sister Sonia live a quiet, country life in their childhood home with plenty of time for self-reflection, and humorous counsel from their housekeeper Cassandra, who believes she has the gift of prophecy. Their pastoral world is upended by the return of their dazzling sister Masha, a high-maintenance Hollywood movie star, and Spike, her young über-hot boy-toy. Together this unlikely foursome is plunged into an absurd weekend of sibling rivalry and regrets that are triggered by a wacky costume party.

The play draws inspiration from characters and plot lines of the plays of Anton Chekhov. Those who’ve studied theatre will get an extra chuckle with the references to Chekhov’s Three Sisters and Uncle Vanya, but even those who are not familiar with those works will not be left in the dust. The entire audience will laugh out loud at the humor of this production.

I was seated next to an uproarious crowd of moms out on the town, and they were having a great night. Loud laughter and merriment was certainly the theme of the evening.

And take note that as a bonus before the show begins, you can arrive early for happy hour at the lounge bar where you’ll also hear live music from The Tim Curry – Will Dunlap Project to start your night off with some fun. 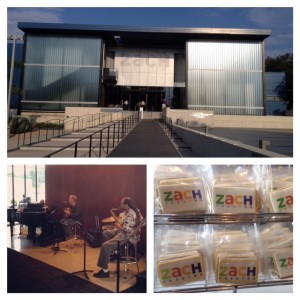