By now, every Austinite has their celebrity-sighting story, whether it Matthew McConaughey or Sandra Bullock. Mine is spotting Molly Ivins in the Magnolia Café booth next to mine, about a year before she died. To me, that lady oozed cool. Great talent, great humor, and great Texas grit all rolled into one.

She’s been on my mind this crazy week, with all that’s happening at the place she used to call “the Big Top.” The state Capitol remains busy, despite that the Texas legislative session was meant to end Monday. Lawmakers are still at it, shortchanging neighborhood schools to the tune of $4 billion and upending health-care programs for women and children. Molly found the legislature hilarious, but even she would have been hard-pressed to laugh this session.

Today also marks the seven-month anniversary of when I met LiveMom’s Catherine and Katie. That day, Catherine talked about her vision for Mommy Mob as “a tight-knit community of local mamas who were there for each other and for our community. . . willing to fight for changes in the community to raise healthier, happier children,” and bring about a better village for everyone, as a result. She at times sounded a little like Molly, who used to say we need to get ourselves out in the streets, banging pots and pans for a cause—only in Catherine’s telling, people are banging the pavement with strollers (minus the babies, of course). That meeting led to me and my colleagues at Texans Care for Children getting an awesome responsibility: a chance to help Catherine shepherd that Mommy Mob vision along.

The half-a-year that followed turned out to be a pretty exciting time for parent activism in Austin. Energized and determined folks from across the state were led by Austin-area parents, who marched by the thousands for their children. 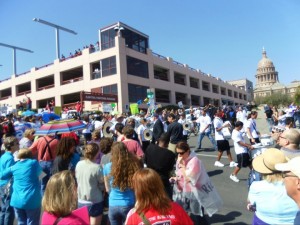 We, the LiveMom bloggers and many of you, joined those parents in speaking out about keeping schools open, keeping them funded. We fought for healthier foods and fitness programs, for environments that support our kids’ mental health, for environments that support us as moms. We took on the special interests that hurt kids and families. We joined forces and started something that’s surely far from finished.

And what comes next for the Mommy Mob? Well, we want to hear your vision. What would it take for you to join other moms on a mission? What would make you feel like an activista extraordinaire? What would you do with a posse of fellow mamas who’ve got your back?

To get things rolling, we’re trying two new things. Every Saturday this month, we’ll bring you the Mommy Mob chronicles. There will be stories about moms who made a difference, highlights of what has changed or is changing for kids thanks to the legislature, and maybe a couple of fun surprises along the way.

We’re also introducing a new weekly feature over on the Mommy Mob page:  our “motivationals.” These will be once-a-week short tips or warm-fuzzies, meant to get you fired up for action. Some weeks we’ll have a concrete activism idea for you (say, how to write a letter to the editor). Other weeks we’ll have a simple, quick thing you can do, in your home or community, to make a difference. This week, we kick it off with a little inspiration from Ms. Ivins herself.

3 Comments on What’s a Mommy Mob for?